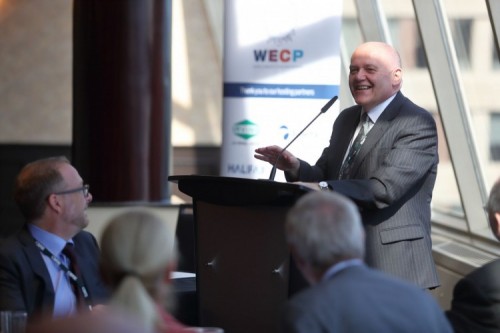 Aberdeen has secured a prime position in a global energy organisation that aims to expand business and investment opportunities and build partnerships.

The Lord Provost of Aberdeen Barney Crockett has been elected Vice-President of the World Energy Cities Partnership (WECP).

At its 20th Annual General Meeting in Halifax, Nova Scotia which brought together 60 mayors, economic development and business delegates from 15 cities. Aberdeen was recognised as a city that reinvented itself to become the centre of the UK’s national oil and gas exploration and production activity and Europe’s most enterprising energy capital.

The Lord Provost was also recognised for his keen knowledge and expertise in many areas of the energy sector and for his work over the years in promoting renewable energy in Aberdeen.

As vice president, the Lord Provost will play a key role in driving forward innovation and developing new energy frontiers across the sectors.

On becoming Vice President of WECP, the Lord Provost of Aberdeen Barney Crockett said: “It is a great honour to be elected Vice President of the World Energy Cities Partnership and I’m looking forward to the work this prestigious role will bring.

“Municipalities are facing challenges never seen before - with issues such as severe weather changes, rapidly emerging technologies, and dramatic energy policy reforms. By working closely with the Mayor of Halifax Mike Savage, President of the WECP, we are keen to play a world lead for energy cities across the globe. As two turbo-charged cities we want to strengthen the network of the WECP in order that we can better collaborate to meet the energy challenges of the future.”

The WECP is an international organisation for energy cities, which share ideas on investment attraction, urban development, and develop strategic alliances. There are currently 19 world energy capitals in the WECP network.

This year’s AGM included sessions on tidal and renewable energy and best practices in sustainability, urban and economic development, and ocean and atmospheric science.

A renewal of the Memorandum of Understanding between Aberdeen City Council and the Council of Halifax Regional Municipality was also signed at the WECP.

It recognises their long-standing civic and commercial ties and the similarities of the economies and geographies of their respective regions. Both regions have a common desire to enhance economic growth, business development, education opportunities and cultural exchange.

The renewal will see Aberdeen and Halifax build on their ongoing membership of the WECP and the collaborative opportunities that this brings.

On the renewal of the Memorandum of Understanding the Lord Provost of Aberdeen Barney Crockett said: “Aberdeen and Halifax have particularly close ties, strengthened in recent years by the energy industry and shared business interests.

“Halifax is a priority market for Aberdeen’s companies and our region. Through our partnership, our cities are able to identify export opportunities and organise trade missions to meet business demands.”

Halifax has had a relationship with Aberdeen for over 35 years,” said Halifax Mayor Mike Savage. “This renewed agreement between our two cities will continue to strengthen our international partnership and enable us to explore new cultural and economic opportunities that will generate business, jobs and growth for both our cities.

“Halifax is currently working with various multi-nationals who are advancing offshore exploration and developing the unique tidal energy sector, while Aberdeen is looking to export its advanced sector knowledge and technology used in exploration and production.”

WECP delegates also had the opportunity to participate in the 35th Annual Core Energy Conference, held in conjunction with the AGM.