Lord-Lieutenant of Aberdeen Plants a Tree for the Jubilee 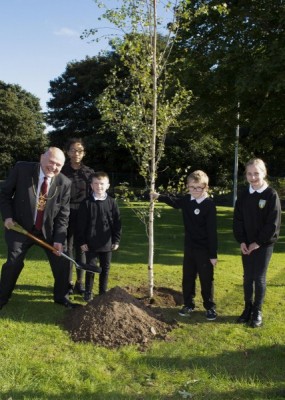 The Lord-Lieutenant of Aberdeen Barney Crockett planted a tree at Tullos Primary School yesterday (Wednesday 6 October) in honour of Her Majesty the Queen’s Platinum Jubilee.

The Lord-Lieutenant was joined by pupils from Tullos Primary School to plant a Betula Pendula Zwisters Glory (silver birch) tree as part of the Queen’s Green Canopy (QGC), a unique tree planting initiative created to mark Her Majesty’s Platinum Jubilee in 2022.

The initiative encourages everyone across the United Kingdom to “Plant a Tree for the Jubilee” and is gifting 70 trees to primary schools across the country.

The Lord-Lieutenant of Aberdeen Barney Crockett said: “I was delighted to join the pupils of Tullos Primary School to plant a silver birch tree as part of Aberdeen’s participation in Her Majesty The Queen’s Green Canopy (QGC) initiative to mark Her Majesty’s Platinum Jubilee in 2022.

“Her Majesty is held in high regard and thought of fondly by Aberdonians. Her Majesty and her late husband His Royal Highness The Duke of Edinburgh visited Aberdeen on each of Her Majesty’s jubilee years.

“I’m also especially proud that we have planted a tree for the jubilee as Aberdeen was named European Forest City in 2019 for the four great forests around the city which provide crucial environmental, social and economic benefits to its citizens which is why trees and tree management are so important.

“I would encourage individuals, communities across the city to Plant a Tree for the Jubilee and be part of this genuine legacy project and wonderful tribute to Her Majesty The Queen.”

The tree planted at Balmoral by Her Majesty the Queen and His Royal Highness Prince Charles, Duke of Rothesay on 1 October, marked the beginning of the Plant a tree for the Jubilee initiative along with an education programme which seeks to inspire young people as future custodians of green spaces, encouraging wider engagement across the school curriculum.

The enterprise invites everyone including individuals, community groups, schools and businesses to play their part to improve our environment by planting trees during the official planting season between October to March. Tree planting will commence again in October 2022, through to the end of the Jubilee year.

Lord-Lieutenant of Aberdeen Plants a Tree for the Jubilee