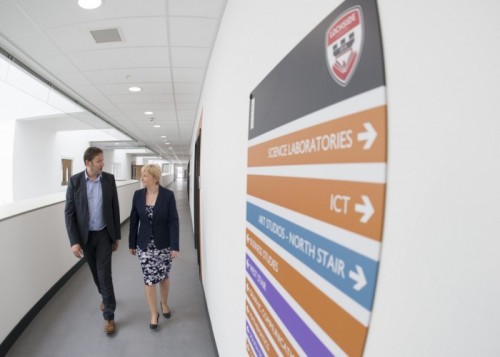 Construction of the £47million Lochside Academy has been completed as Aberdeen City Council prepares for the first intake of pupils in August.

Lochside Academy replaces Kincorth Academy and Torry Academy, which will both close at the end of the current term, and its catchment area in the south of the city includes Cove.

The completed building was handed over to the Council by development lead hub North Scotland and main contractor Balfour Beatty today (June 15). An intensive fit out period will take place over the summer to prepare for the new school year and the site will continue to be a hive of activity over the next nine weeks.

With a capacity of up to 1,350 pupils, the three-storey building incorporates community facilities including a six-lane swimming pool, fitness suite, dance and drama studios, 4G sports pitches, games halls and library.

It represents the largest ever single investment in the Aberdeen school estate and is part of the Council’s ongoing commitment to providing new and improved facilities across all areas.

Lochside Academy will welcome pupils on August 23 – the same day on which the £13m Stoneywood School will open its doors. Both schools open a day later than others in the city to allow staff to prepare in their new surroundings.

That follows last summer’s opening of the £18.5m Orchard Brae School and a series of further investments in existing and new facilities are in the pipeline.

Cllr Laing said: “Lochside Academy is an impressive school which will serve the south of the city well for generations to come. Despite the scale of the project, it has been designed to ensure a welcoming and nurturing atmosphere that will support modern learning. The attention to detail from design through to construction is fantastic.

“Pupils, staff and the wider community will benefit from state of the art facilities and as a Council we are proud to have delivered this for the city as part of the significant ongoing investment being made in education and recreation across Aberdeen. The city’s young people will drive Aberdeen’s future success and the Council is determined to provide the best possible platform for pupils.”

Cllr Lumsden said: “The handover of the site to the Council marks the latest important milestone in our school construction programme and it is a wonderful complex, providing the perfect learning environment. Stoneywood School will do the same for those it serves and the tens of millions of pounds that have been pledged to improving facilities are really bearing fruit for all our communities.

“Having the very best buildings available is vital to our ambitious strategy around education delivery in Aberdeen – but the leadership team, staff and pupils will be the most important part of the success of Lochside Academy and Stoneywood School. We know we are in very good hands in that respect and the transition to the new schools in the summer term will be an exciting time for everyone involved.”