The Marguerite McBey Trust has gifted quarter of a million pounds to the Inspiring Art and Music redevelopment.

The funds will be used to establish a new gallery and a revitalised research library celebrating the life and career of James McBey (1883-1959) as part of Aberdeen City Council’s £30million transformation of Aberdeen Art Gallery, Cowdray Hall and Remembrance Hall. 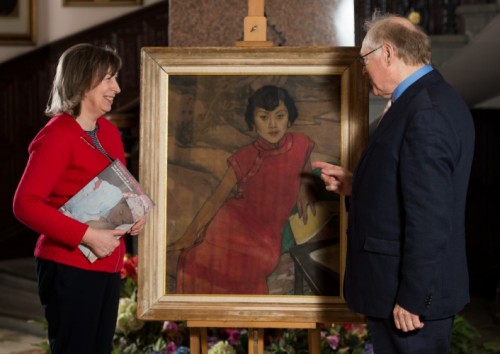 McBey was a self-taught printmaker, draftsman and painter of international repute, whose life revolved around art and adventure.

The extraordinary story of his varied career will be told for new generations of visitors through Aberdeen Art Gallery and Museums’ extensive collections of McBey material: some 6,000 items including furniture and effects from the artist’s studio, memorabilia, etchings, watercolours, sketchbooks, oil paintings, diaries and photographs, as well as McBey’s personal library.

Born in Foveran in Aberdeenshire, James McBey worked as a clerk for the North of Scotland Bank. In his spare time he taught himself etching from a book borrowed from Aberdeen Public Library, producing his first works using his grandparents’ mangle.

An Aberdeen City Council spokeswoman said: “James McBey lived a colourful life as an artist and adventurer, but never forgot his love for his home city.

“We are tremendously grateful to the Marguerite McBey Trust for this significant support for the Inspiring Art and Music redevelopment.

“With this award, the fundraising campaign has achieved another significant milestone – we are delighted to announce that the total raised to date has surpassed the £3m mark.”

McBey learnt about art history from books and travels to Europe. In 1911 he moved to London, a move which marked the beginnings of a career as an artist of international repute.

McBey’s rise to fame and fortune afforded him a privileged lifestyle, and although he never returned to live in Aberdeen, choosing to settle in Morocco, McBey remembered and celebrated his roots.

During the First World War he worked as an Official War Artist with Allenby in Egypt and Palestine. With the decline in the popularity of etching in the 1940s, the charismatic McBey reinvented himself as a portrait painter and watercolour artist whose work was popular with collectors in the USA, where he met Marguerite, whom he married in 1931.

Marguerite McBey (née Loeb, 1905-1999) became a major benefactor of Aberdeen Art Gallery, making its collection of McBey's work the best in the world.

The Trust was established in 2001 at the request of the executors of her will, for the benefit of Aberdeen Art Gallery, specifically to promote access to, interpretation of, conservation and development of the Fine Art Collection.

The £253,675 award builds on the Marguerite McBey Trust’s support for the Inspiring Art and Music project. An earlier donation of £75,000 funded a feasibility study for the entire redevelopment of Aberdeen Art Gallery and Cowdray Hall which is currently underway.

The Trust is chaired by Dr Ian McKenzie Smith CBE, acclaimed artist and former Director of Aberdeen Art Gallery and Museums (1968-1989). Dr McKenzie Smith said: “Marguerite McBey was a remarkable artist in her own right, and Aberdeen Art Gallery has been fortunate in having enjoyed her enthusiastic support over many years. The long-awaited regeneration of the Art Gallery, Remembrance Hall and Cowdray Hall will greatly enrich the city for many years hence, and the Trust’s contrbiution, the print collections and accessible research library will inevitably become the essential heart of this ambitious development.”