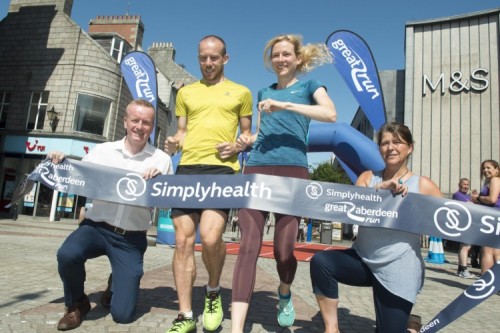 A last call for entries for the half marathon, 10k and family run at the Simplyhealth Great Aberdeen Run has been issued as partners prepare for the finishing flag to fall on the event after three successful years.

The run is staged by the Great Run Company in collaboration with Aberdeen City Council, VisitAberdeenshire, Aberdeen and Grampian Chamber of Commerce and Aberdeen Inspired.

The three-year contract comes to an end after this year’s event on August 25 and it has been confirmed that will not be extended into 2020.

Councillor Marie Boulton, Aberdeen City Council’s culture spokesperson, said: “Thousands have participated in the Great Aberdeen Run since its inception in 2017 and this year’s event will bring more colour and life to the streets of the city. We would encourage anyone who has yet to sign-up to add their name to the entry list for the 10k or family run.

“Our Aberdeen 365 events strategy has brought an array of new and fresh attractions to the city – everything from the Great Aberdeen Run and Tour Series cycling to Spectra, Nuart and many more. It’s important we keep constantly evolving to retain interest and reach new audiences.

“We have seen the success of the Tour Series used as a springboard to transition to the region hosting the Tour of Britain and just this week we have announced the return of a reimagined Spectra festival of light after a one year break. We are already exploring sporting and cultural opportunities to replace the run, acknowledging its popularity over the past three years. Our thanks go to everyone who has supported the Great Aberdeen Run, both those who have taken part and the residents who have played their part.”

The event will conclude on 25 August after thousands of runners of all ages and abilities take on the challenge of a half marathon, 10K or family run on a closed-road course that features some of Aberdeen’s most iconic locations.

Chris Foy, Chief Executive, VisitAberdeenshire said: “The Simplyhealth Great Aberdeen Run route shows off our city in its very best light, taking in great attractions, street art and little pieces of history key to Aberdeen’s DNA. With final places up for grabs, be quick to secure your spot at the Great Aberdeen Run.

“Looking forward, the city’s events calendar is looking stronger than ever, and with the reopening of Aberdeen Art Gallery later this year and a brilliant rollcall of acts performing at P&J Live, there’s plenty to look forward to in the months ahead.”

Adrian Watson, chief executive of Aberdeen Inspired, said: “I hope those still swithering grab the last opportunity to sign up to this running event that has graced our city centre streets for three years.

“It is one of many events and festivals that Aberdeen Inspired deliver and/or support partners with, alongside the likes of Nuart, the Aberdeen International Comedy Festival and Inspired Nights.

“Our vision is still to see a competitive and ambitious running race in our city centre in future years and we look forward to working with partners to make this a reality.”

To sign up to the Great Aberdeen Run visit https://www.greatrun.org/great-aberdeen-run .