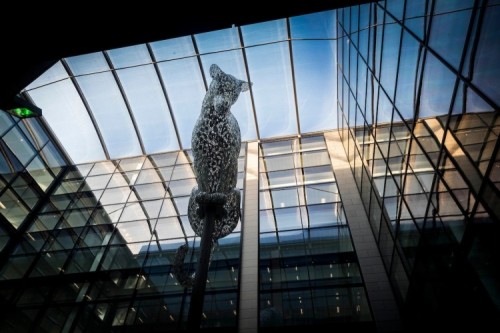 Internationally renowned sculptor Andy Scott has brought his world-class artwork to Aberdeen in the shape of a major new project at the prestigious £107million Marischal Square development in the city centre.

Scott, a graduate of Glasgow School of Art, works internationally from his studio workshop where he creates prominent public artworks for private, corporate and civic clients. His prodigious output now numbers in excess of eighty projects across the UK and internationally, but this will be the first time he has delivered an artwork of this scale in the Granite City.

The new work will form a key element of the open to the public sections of the development and will be on display in the enclosed atrium space of 1MSq from next week (Friday, November 3rd).

Scott’s most prominent project to date is the multi-award winning Kelpies, a stunning pair of 30-metre high, 300-ton horse heads, sited in Falkirk which are now regarded as the best-known public artworks in Scotland and have attracted over two million visitors since their inauguration.

Development partners Muse Developments and Aviva Investors commissioned a stunning centerpiece for the city centre regeneration project and the Leopard sculpture has been inspired by symbols on Aberdeen City Council’s historic coat of arms.

Both the artist and developers believe the Leopard has the potential to have a significant impact on the project and the city’s tourism economy.

Aberdeen City Council City Centre Masterplan lead Councillor Marie Boulton said: “At the outset of the Marischal Square project, we identified that public art would play a vital role in attracting both business and visitors to the prestigious new development, so it’s fantastic not only we have this art, but it’s also an amazing sculpture by Andy Scott.

“Andy’s work around Scotland is so well known and so it’s brilliant that his first major work in Aberdeen is here at Marischal Square and will be open to the public.

“His sculpture of a leopard is extremely impressive and is very appropriate for Aberdeen as leopards are a symbol of the city, featuring in our coat of arms after legend says they were bestowed as a gift by King James I for underwriting his expenses while he was held captive in England.

“We look forward to this contemporary new leopard in Aberdeen being enjoyed by residents and visitors in our beautiful city.”

Scott works in steel and bronze, combining figurative and equine themes with contemporary techniques to create stunning landmark artworks in a range of locations across the world including New York, Sydney and Chicago, as well as Glasgow, Falkirk, Cumbernauld, Leeds and Belfast in the UK.

He said: “I’ve worked on this sculpture for over a year in the studio and it’s been very demanding. There are literally thousands of steel fragments, all individually welded to create the form of the artwork. It now stands five metres tall, weighs just over two tons, and will sit proudly atop a ten metre high steel column. I hope it brings a real presence and sense of drama to the atrium space of Marischal Square.”

Muse Developments’ Director, Scotland, Stephen Turner, said the decision to work with Andy Scott was a significant moment for everyone involved in the Marischal Square project.

“If you look at Andy’s work and history and the massive impact made by The Kelpies in Falkirk, you can see why we are all delighted to work with him on a project which we believe will be huge for the development and the city,” he added.

“The new artwork fits right into the project partners’ ambitions to ensure that Marischal Square not only works for the business community in Aberdeen, but also draws people into the city centre area and extends the economic benefit delivered by the development.”

The Marischal Square development includes two office buildings providing 173,500 sq ft of Grade ‘A’ office space with secure parking, a mixture of granite and glass in the elevations, seven restaurants and café bars occupying the ground floor space, and a 126-room Residence Inn by Marriott.

The Residence Inn by Marriott brings a new concept to Aberdeen, offering a ‘home from home’ with the benefits of a hotel but privacy of a serviced apartment. Each of the 126 suites is fully equipped with kitchen facilities as well as space to relax. Guests have access to free wi-fi and buffet breakfast, as well as a 24-hour lobby, mini market, shopping delivery service, gym facilities and a self-service laundry facility.