Aberdeen's Union Terrace Gardens has welcomed a unique set of visitors after one of the world's most eye-catching art installations was officially unveiled.

Business organisation Aberdeen Inspired has been working with Australian artist Amanda Parer to bring her striking light installation 'Intrude' to the city.

The installation, which features a collection of giant inflatable illuminated rabbits which stand up to seven-metres tall, has been revealed within Union Terrace Gardens and will take up residence within the city centre greenspace until January 15.

Serving as a precursor to February's SPECTRA, the increasingly popular Aberdeen festival of light, Intrude has already been on show at a number of high profile festivals around the world, most recently appearing at the Istanbul Light Festival in Turkey and the Lightwaves Festival at the Lowry in Manchester. 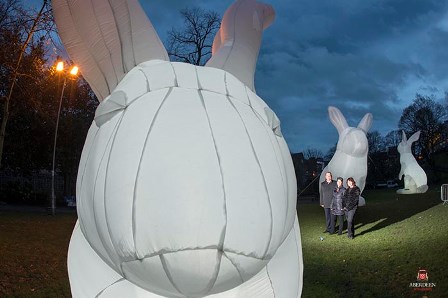 Aberdeen City Council Depute Leader Marie Boulton said: "The Intrude art installation has been on show all over the world and it's great that it is now in Aberdeen.

"The installation is part of the biggest-ever Winter Festival being held in the city, with the idea being of something for everyone and while the giant glowing bunnies will not be everyone's cup of tea, they will certainly invoke a reaction.

"Intrude will not only lead into the SPECTRA Festival of Light in February but will also light up Union Terrace Gardens and add to the thousands of twinkling lights across the city centre which are helping it feel very festive for people who live in the city and for visitors from further away."

The work's arrival is also part of the city's biggest-ever Winter Festival, which this year features the new Aberdeen Christmas Village. Spearheaded by Aberdeen Inspired, in partnership with Aberdeen City Council and amusement specialist Codona's, the village will run alongside Intrude on the city's Union Terrace until January 3. 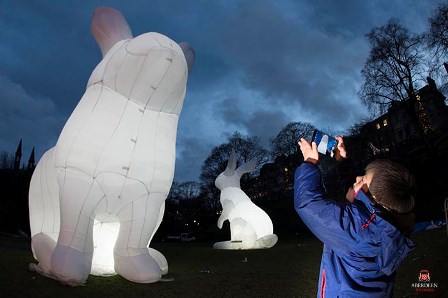 Gary Craig, chief executive of Aberdeen Inspired, said: "We've been working hard for a number of months to bring Amanda's work to the city in time for Christmas and it's fantastic to have what is a striking and high-profile piece of art present in the heart of our city.

"The arrival of Intrude was timed so that it would benefit from the increased footfall within the area, with the Aberdeen Christmas Village, part of the biggest Winter Festival ever held, taking place at the same time. This piece of art work has received critical acclaim throughout the world and it is a major coup for us to be able to bring this to a north-east audience for it to view for free.

"Aberdeen Inspired has an important role to play in supporting the arts and we are prepared to continue to invest to bring the best, most captivating and thought provoking work to our city centre."

Amanda Parer said: "I am very excited to be bringing my giant glowing rabbits to Aberdeen, Scotland's silver city. The idea of having these giant pieces on display is that they don't fit in. It is a playful art work that evokes fantasy and wonder. It has been designed to give the sense that five giant glowing white rabbits have just hopped in and intruded on a given environment, in this case the Aberdeen's wonderful Union Terrace Gardens.

"I look forward to seeing the art work in the city's winterscape during the festive season and it is an honour that the artwork has been invited to be part of the city's biggest-ever Winter Festival. Thank you city of Aberdeen."

The Aberdeen Christmas Village consists of an open-air ice rink, a range of amusements and market stalls as well as an entertainment marquee which is open daily from noon to 10pm. The scheduled entertainment takes place from Thursday to Sunday; from 6pm to 10pm, as well as weekend afternoons from noon to 3pm. Performers include Iron Broo, Dirty Shoes, The Lorelei, Best Girl Athlete, Jordon Young and Gary Meikle among many others.

The Aberdeen Christmas Village runs until January 3. Union Terrace will remain closed until January 8 to accommodate the Village, with a number of traffic measures in place for the duration.