... but action needed to prepare for future challenges

The Aberdeen City Region’s economy is showing signs of modest recovery and is forecast to grow in the years ahead – despite difficult global trading conditions and ongoing political uncertainty.

An independent report assessing the challenges and opportunities ahead – and carrying recommendations about how to respond – was launched today at the State of the Cities Conference hosted by Aberdeen City Council at P&J Live.

Published by the Aberdeen Economic Policy Panel, the report examined the Regional Economic Strategy’s response to the recent oil downturn and in doing so reaffirmed the cautious optimism of last year’s inaugural report.

The report underlined the continuing significance of the oil and gas sector but stressed the need for diversification within both the energy sector and the wider North East economy, whilst welcoming the increasing focus on renewables, digital, life sciences, culture, and tourism.

Challenges identified included the transition to a net zero emissions economy and population ageing, with the Panel calling for bold action across the public, private and university sector in the region to meet these and to seek out new opportunities.

Cllr Douglas Lumsden said: “We’re proud of a proactive and dynamic approach to economic development and will continue to push forward with our plans, buoyed by the evidence that the strategy is supporting the renaissance of the region.

“We will also continue to invest in digital infrastructure, roads, schools and thousands of new Council homes in all corners of Aberdeen as we focus on inclusive economic growth and the vision for a city where everyone can prosper.

“The increasing collaboration and partnership working we see is delivering results in innovation and industry. We have to build from the position of strength we are in and look forward with the same drive and determination that first established Aberdeen as an economic powerhouse.” 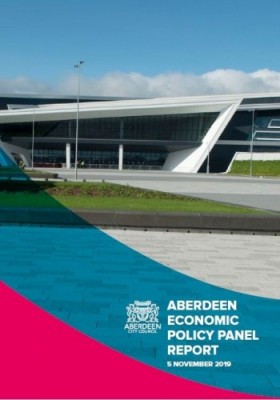 Cllr Laing said: “At the inaugural State of the Cities conference last year I spoke of our ambition to deliver projects that fostered inclusive economic growth for the people of Aberdeen and of our determination to do that at pace.

“In the 12-months since then the achievements have underlined that commitment.

“From the opening of P&J Live and Aberdeen Art Gallery to the investment in housing and schools, 2019 has been a year in the life of what I would describe as no ordinary city and an extraordinary council, delivering quite incredible achievements against the odds and with a backdrop of economic challenges that need no explanation.

“The message today is that we will not rest on our laurels and pledge as a Council to continue the journey we are on both socially and economically.”

Major infrastructure investment in the region includes the recently-opened Aberdeen Western Peripheral Route, the provision of digital infrastructure through the City Region Deal, and the planned expansion of Aberdeen Harbour.

The 10 recommendations put forward by the Panel included a greater focus on implementing the Regional Economic Strategy and to build upon the collaboration between business, academic institutions and policy makers, which was recognised as a key strength.

It was suggested Aberdeen take a national lead in focusing policy on improving wellbeing across the economy as it continues its work to promote sustainable and inclusive growth.

The Panel also called for new thinking on how future regional funding would be allocated and discussion around local autonomy to help Aberdeen City Region achieve its full potential and manage the transition to a low carbon economy.

Trends over the last 12 months were described as very much a continuation of the moderate improvements observed in the previous 12 months, with the Panel concluding that the Aberdeen City Region’s economy was entering this period in a stronger position than in recent years.

The conference’s keynote speaker Sir Howard Bernstein, who led Manchester’s transformation as Chief Executive of the city’s council from 1998 to 2017, was joined by Deirdre Michie, Oil and Gas UK Chief Executive, and Chris Murray, Director of Core Cities, in addressing delegates as part of the State of the Cities programme.

The report can be found here.