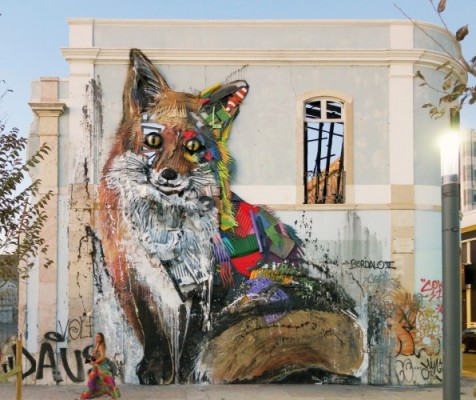 Leading international street artists from across the globe will bring a new splash of colour to Aberdeen this April during the return of the Nuart Aberdeen festival.

Artists from Argentina, Lithuania, Norway, Portugal and the UK have been announced to complete the line-up for the UK’s leading celebration of street art, which will be held in the Granite City this spring.

The festival, which is delivered by business organisation Aberdeen Inspired in partnership with Nuart Festival and Aberdeen City Council, will take place from Thursday, April 12 to Sunday, April 15 and is set to attract thousands of visitors into the city centre.

The Council has committed to investing £300,000 over three years to Nuart Aberdeen as part of the wider city events strategy.

The theme for this year’s festival is ‘A Revolution of the Ordinary’ and it will investigate the parallel world of non-institutional art and culture through a program of talks and debates, film screenings, walking tours and workshops over four days.

Organisers of the festival have secured several new walls across the city centre and the west end for the artists to work on, including a wall at city centre restaurant Rustico on Union Row.

Held in the Norwegian city of Stavanger since 2001 and widely regarded as the world’s leading celebration of street art, Nuart Aberdeen is the first and only overseas version of the festival, first hosted in Aberdeen in 2017 to widespread acclaim.

Councillor Jenny Laing, Co-Leader of Aberdeen City Council said: “Following the success of SPECTRA, Aberdeen’s festival of light, we are excited to be bringing the streets of Aberdeen alive once again with Nuart.

“As part of our Aberdeen Events 365 Strategy through our City Centre Masterplan, Aberdeen City Council is committed to making our city an even more vibrant place to live, work and visit – and outdoor art exhibitions such as Nuart and SPECTRA encourage people into the city centre at a quieter time of year, boosting the local economy and reactivating city centre spaces.

“The calibre of the artists for Nuart 2018 is outstanding and as Scotland, and Aberdeen’s reputation as a tourist destination continues to develop, attractions such as these play a pivotal role in the cultural offering that attracts visitors.”

Adrian Watson, chief executive of Aberdeen Inspired, said: “We’re delighted to have secured an impressive and talented line-up of street artists for the Nuart Aberdeen festival, and look forward to welcoming them this spring.

“The festival was an overwhelming success last year and we hope to build on this to help market Aberdeen as a destination of choice to visitors from the rest of the country and beyond.

“As well as continuing to use walls in the city centre there will also be a focus in the city’s west end this year and a number of locations have been secured in the area for the festival, including a wall at Rustico, which will bring something new to the area.”

Big Trash Animals, his series of large-scale sculptures, depicts animals made from discarded and recycled materials. Through portraying animals made from the materials that are responsible for the destruction of their habitats, Bordalo II draws attention to the problem of waste and pollution, and its effect on the planet.

His works are built with locally sourced end-of-life materials: the majority found in wastelands, abandoned factories and industrial estates. Damaged car bumpers, used tires, garbage cans and household appliances are just some of the objects that can be identified within his vibrant sculptures.Bordalo II participated in Nuart Festival in Stavanger in 2015 and has since gone on to establish himself as one of the world’s leading street artists.

He said: “Nuart 2015 in Stavanger was one of my first festivals and best experiences to date. It will be great to reunite with the team again after all these years. I’ve already started researching Scottish wildlife and nature, and am looking forward to producing something unique for the people of Aberdeen this April.”

Classically trained as a painter and with a degree in fine art, Lithuanian-born artist Ernest Zacharevic describes himself as ‘a fine artist who prefers to work on the street'. Based in Penang, Malaysia, he has built a strong reputation in street and fine-art circles with the emotional impact and interdisciplinary nature of his work. Moving freely between oil painting, installation, sculpture, illustration and stencils, Zacharevic regularly combines real objects and painted figures to produce interesting and exciting compositions.

The Glöbel Brothers, otherwise known as Ciaran Glöbel and Conzo Throb, are a Glasgow-based duo whose public artworks revive the long and venerable tradition of sign painting. Exploring a more contemporary approach to this antiquated craft since 2013, Ciaran is an artist and graphic designer who uses traditional signwriting tools and techniques to produce striking, hand painted artworks. As well as painting their largest mural to date at Nuart Aberdeen, Ciaran and Conzo will also be hosting a sign painting workshop with local art and design students on Saturday, April 14.