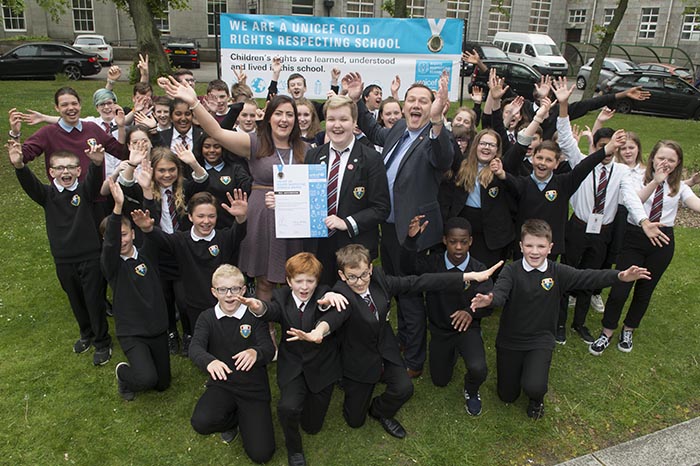 Harlaw Academy today (Thursday 31 May) celebrated a remarkable UK first from Unicef and sealing a unique double achievement for Aberdeen schools in doing so.

The secondary school becomes the first to receive a Gold Award from Unicef UK under a new rating and assessment system. Ferryhill School recently achieved the same feat but at Primary School level for an amazing city double first.

Unicef is the world’s leading organisation working for children and their rights. The Rights Respecting Schools Award is granted to schools that show commitment to promoting and realising children’s rights and encouraging adults, children and young people to respect the rights of others in school. Gold is the highest accolade given by Unicef UK and shows a deep and thorough commitment to children’s rights at all levels of school life.

Aberdeen City Council Co Leader, Councillor Douglas Lumsden, said: “This is a fantastic accolade for the pupils and staff at Harlaw. The assessment report which led to the Gold award demonstrates just how dedicated everyone at the school is to upholding the principles of the United Nations Convention on the Rights of the Child (UNCRC).

“Everyone in Aberdeen City Council and across the city as whole can feel justly proud of the two schools for leading the way for all schools in the UK in living the values of Unicef”.

The Award recognises achievement in putting the UNCRC at the heart of a school’s planning, policies and practice. A Rights Respecting School is a community where children’s rights are learned, taught, practised, respected, protected and promoted.

David Innes, Head Teacher at Harlaw Academy, said: “Recognising and realising the rights of children informs all we try to do at Harlaw Academy. This award is a reflection of how far we have come over recent years but it also inspires us to keep promoting pupil participation and involvement. We were an early adopter of the new structure of the UNICEF UK Rights respecting Schools Award and are extremely proud to be the first Secondary School in UK to gain the award under the new criteria”.