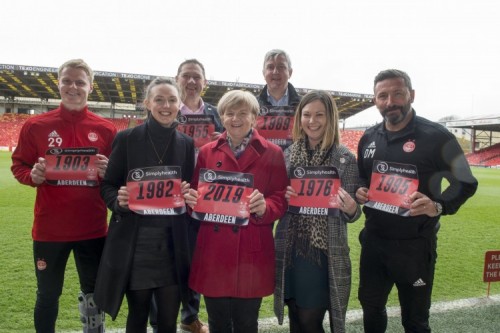 Aberdeen Football Club fans are being invited to create a sea of colour at the Simplyhealth Great Aberdeen Run this August.

In a pioneering initiative to encourage improved fitness and wellbeing in the community, the Dons have joined forces with event organisers The Great Run Company to create a special red wave at the event, which features a 10k and half marathon.

Supporters who sign up for the August 25 event, which is for runners, joggers and walkers of all abilities, will be encouraged with special training programmes and advice from the backroom staff at Aberdeen FC for the big day.

On event day itself, supporters who have signed up will start in a special dedicated red wave, sporting the club logo on their run number and being sent on their way by some of the club’s legendary figures. They will also be joined by a team of football club staff who will be raising money for the Aberdeen FC Community Trust.

Manager Derek McInnes said, “This is a great initiative and we would love to see supporters, with our encouragement, train for the event and join us on the day.”

Rob Hedderman, Manager of the Community Trust, is also excited about the prospect of the red wave. He said: “This is a great opportunity for Aberdeen FC to do something special in the community and of course I hope supporters will look to raise money for our Trust.”

Councillor Jenny Laing, Aberdeen City Council Co-Leader, said: “We’re delighted to be supporting the red wave, which will bring even more colour to what has been a tremendous event over the past two years. As a Council we’re investing significantly in our Aberdeen 365 events strategy and attracting the Simplyhealth Great Aberdeen Run to the city has been a major part of the success we have seen. We’re looking forward to this year’s event and to welcoming thousands of participants and spectators.”

In order to join the red wave for the half marathon or 10k, fans should tick the box that is featured on the entry form confirming their allegiance to the Dons.