Gearing up for cycling fun in the Gardens

Cycling fever hits Union Terrace Gardens this week with the creation of the cycling activity village ahead of The Tour Series arriving in Aberdeen on the 25 May. 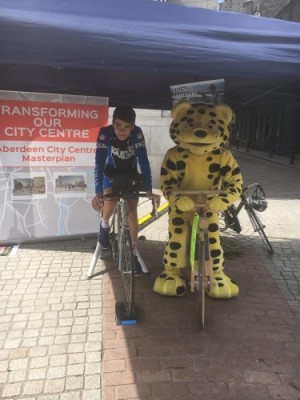 The Tour Series is being brought to the city as part of the wider Aberdeen 365 Events Strategy, a City Centre Masterplan initiative.

Aberdeen is one of two Scottish venues on this year’s Tour Series, in which elite riders face each other in an exciting format.

In support of the crowd-pulling elite race, a full programme of family activities is planned and will be based at Union Terrace Gardens on race day.

Celebrating 200 years of cycling, Grampian Transport Museum is donating one of their interactive Smart Tacx Turbo trainers to The Tour Series activity village on May 25.

Turbo trainers allow riders to compete against themselves, and top cyclists, over some of the world’s most famous cycling routes in real time and offering the most realistic virtual cycling experience.

There is even the option to race virtually with anyone anywhere in the world.

Several of the area’s top riders have already taken the Grampian Transport Museum challenge and their times are displayed on a Top Gear type league table – in addition to top local riders like John Entwhistle, pledges of support have also been received from Guy Martin.

Grampian Transport Museum will be in Union Terrace Gardens from 12.30pm and are inviting keen cyclists to take part in their Turbo Trainer challenge to allow comparisons of their performance with top cyclists from different disciplines and age groups including Mark Beaumont, Jon Entwistle, Helen Miskelly, Katie Entwistle (the youngest ever rider to complete the Strathpuffer), Struan Pryde, Bill Byth and (soon) a certain Guy Martin, whose 2016 Tour Divide bike is a star exhibit in the Museum.

Ythan Cycle Club junior member and North-east cycling rising star Daniel Kain will be one of the local youth riders taking part in the amateur races around the revised day circuit on the 25th May.

A product of the successful youth programme at Ythan, Daniel is coached by his grandad Norman who is himself a renowned racer. Daniel races each week at Glasgow velodrome and regularly wins in his age group and above.

Last weekend he competed in two time trials. His first, a 10-mile time trial, was completed in a time of 22 minutes 8 seconds. His second race was a 25-mile time trial and he raced to a sub-hour time of 59 minutes 14 seconds, a blistering pace for his first ever trial over the distance.

From 12.30pm in Union Terrace Gardens, there will be a host of free fun-filled activities for all to enjoy at the one-day cycling activity village.

Live performances from The Clan cycle stunt team will showcase a variety of technical skills by some of Scotland's top stunt cyclists as part of their Trials Battle show at 2pm, 4pm and 6pm. They will also be dropping into St Nicholas Street for a ground display at noon.

For toddlers to young teens there will be something for everyone to try - from Balance Bikers, including an adult sized balance bike and the Transition Extreme and Adventure Aberdeen's Get About roadshow to fun, games and giveaways with Aberdeen Sports Village.

The local cycling community, including shops and clubs, will also be on hand to talk all things cycling.

The Tour Series, Aberdeen Round 8 is being supported by EventScotland, part of VisitScotland’s Events Directorate.

Gearing up for cycling fun in the Gardens