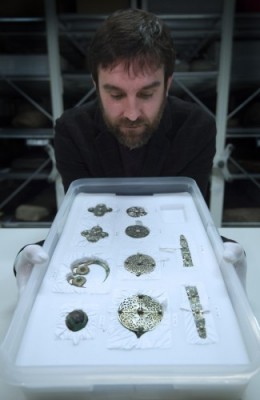 Aberdeen Art Gallery has been confirmed as one of only three venues for a tour of an exhibition of the Galloway Hoard.

The Hoard was discovered in 2014 at a site on Church of Scotland land in Galloway. Following the acquisition by National Museums Scotland in 2017 for the sum of £1.98 million, it is currently being conserved and researched at the National Museums Collection Centre in Edinburgh.

The Hoard, which brings together the richest collection of rare and unique Viking-age objects ever found in Britain or Ireland, is of international significance and will transform understanding of this period of Scottish history. Buried at the beginning of the 10th century, it comprises in excess of 100 gold, silver and other items.

An exhibition of the Galloway Hoard will be displayed at the National Museum of Scotland before touring to Kirkcudbright Galleries, The McManus in Dundee and Aberdeen Art Gallery.

Cllr Marie Boulton, Aberdeen City Council’s culture spokesperson, said: “The Viking era continues to fascinate us in the modern age. We are delighted that the revitalised Aberdeen Art Gallery will be a venue for this national tour of the Galloway Hoard in 2021/22.

"Our visitors will be able to explore one of the most significant collections of Viking-age objects ever found in the British Isles in the surroundings of our new purpose-built special exhibition galleries. Thanks to our major redevelopment, these galleries wnow meet the highest conservation standards for the display of artworks and artefacts, allowing us to borrow from the very best collections around the world, including our own National Museums Scotland.”

Following the tour part of the Hoard will be on long-term display at the National Museum of Scotland in Edinburgh with a significant and representative portion also displayed long-term at Kirkcudbright Galleries.