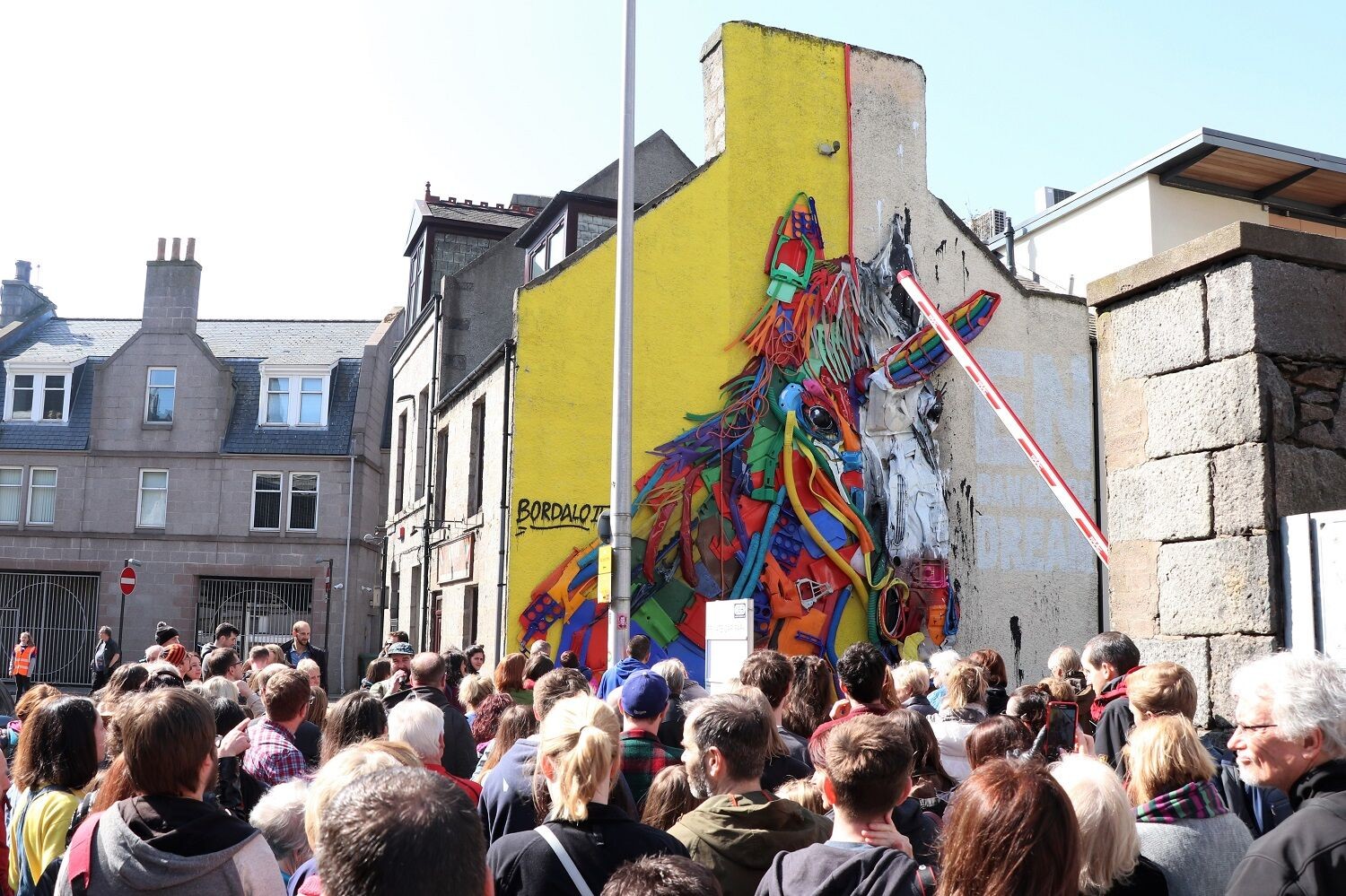 With three weeks to go until Nuart Aberdeen gets underway, the wide-ranging programme for the award-winning street art festival has been revealed.

From artist talks, debates and guided walking tours to exclusive film screenings and lectures, there will be a wide range of activities for visitors to immerse themselves in when the festival bursts into life from April 18-21.

The Nuart Plus programme of events gets underway at the Belmont Filmhouse on Thursday, April 18, with the previously announced exclusive In Conversation event with playwright, designer and celebrated Scottish artist John Byrne.

Nuart Aberdeen is spearheaded by Aberdeen Inspired and Aberdeen City Council, with support from delivery partners Burness Paull and The McGinty’s Group.

Councillor Marie Boulton, Aberdeen City Council’s culture spokesperson, said: “Nuart Aberdeen brings another fantastic programme for 2019 and excitement is building as the opening day draws closer. There is always an incredible welcome for the artists and the work they create – with a real sense of anticipation as the walls and buildings are brought to life. The response of residents and visitors alike has been incredible and we have another wonderful event to look forward to.

“Aberdeen City Council is proud to be a Nuart Aberdeen partner and our £300,000 funding commitment over three years underlines our support for building an innovative and vibrant events programme through our Aberdeen 365 strategy and City Centre Masterplan.”

The first of two conference days will begin on Friday April 19 and continue on Saturday April 20, featuring talks and presentations from this year’s artists, along with insights from writers, curators, film makers and researchers, who will explore global issues that surround the street art phenomenon.

Martyn Reed, Director and Curator of Nuart, said: “Nuart Plus consists of some of the finest minds dedicated to the study of Street Art and related practices, interspersed with artist presentations, films and panel debates designed to entertain as much as they are educate. I’d urge anyone with a passing interest in what Nuart Aberdeen does, to join us at the Belmont over Easter Weekend and take in some of the Fringe events too.”

Dr Susan Hansen, host and co-curator of the conference, added: “Our Street Art Talks at the Belmont Filmhouse (April 19-20) will bring together a rare mix of local and international experts for two jam packed days – all talks are free and open to the public. We are delighted that so many of our festival artists have made time to join us at the Belmont, and we’re absolutely thrilled to have the award winning Professor Jeff Ferrell joining us this year as our keynote speaker – all the way from Texas.”

Adrian Watson, chief executive of Aberdeen Inspired, said: “We are delighted to announce the comprehensive range of talks, debates, workshops, screenings and much more that makes up the Nuart Aberdeen programme this year.

“Now in its third year, it has been incredible to see the impact Nuart Aberdeen continues to have on the city. It has truly captured the hearts and minds of the public and we hope to continue building on that success to further position Aberdeen as a destination of choice to visitors from near and far afield. From soaking up the atmosphere of Inspired Nights on the Green, taking part in walking tours, engaging in debate and enjoying exclusive film screenings, there is a lot for the public to get involved with.”

The Belmont Filmhouse will also host a range of other events throughout the festival, including an exclusive premiere of Imaginary City, a poetic visual essay which traverses the history of the NUart festival on Friday, April 19, along with a Q and A with the filmmaker Kristina Borhes. A screening of Citizen Jane – Battle for the City will also be shown on April 19, and the Cannes Film Festival award winning Faces Places on April 20.

Meanwhile those in the mood for some Fight Club can head over to Underdog on April 19 for a public debate with a difference as two teams of artists and academics do battle.

Not to be missed on April 20, leading criminologist, and visiting Professor of Criminology, University of Kent, Jeff Ferrell (Professor of Sociology at Texas Christian University), USA, will give a keynote presentation entitled Uncertain in the City.

On the same day, artist Axel Void and editor-in-chief of Juxtapoz Evan Pricco will be in conversation, discussing the many stories, varied collaborations, and human encounters, behind Axel’s work and adventures.

Those wanting an insight into the Graffiti Grandmas phenomenon and how it unfolded in Portugal, should head along to the screening of the film and get the inside scoop on destroying stereotypes through a Q and A with LATA 65 founder Lara Seixo Rodrigues.

The festival’s public opening will be held at The Green at 1pm on Saturday, April 20, and for the first time, will include the popular Inspired Nights on the Green. Featuring music, street food, licensed bars, art stalls and kids workshops over the Easter weekend, it will be the place to be to sample a range of treats and activities.

The ever-popular free walking tours will begin at the launch event on Saturday, held at 1.30pm, 2.30pm and 3.30pm. They will continue on Sunday, April 21, with tours at 2pm and 3pm.

On both Saturday and Sunday (April 19-20), street art scholar Javier Abarca will lead a psychogeographic tour entitled Parallel City. For those looking to have a great night out, there will be nowhere better than the official Nuart launch party with All Night Passion at the Tunnels on April 20.

Youngsters will also be invited to create an imaginary rooftop city during the Chalk Don’t Chalk LEGO workshop, as they are invited to join artists and hosts in a brick build on Sunday, April 21, at the Rooftop Garden, St Nicholas.