Freedom of the City of Aberdeen: Stage set for weekend celebration of Denis Law 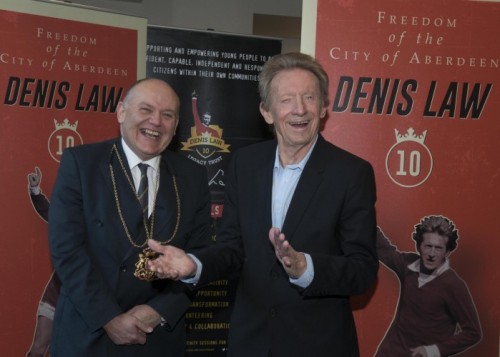 The final preparations are being made as the countdown to Denis Law receiving the Freedom of the City of Aberdeen draws to a close.

The sporting legend will receive the honour at a conferral ceremony on Saturday (November 25) and will be greeted by the Aberdeen public on Sunday (November 26) when the new Freeman is paraded down Union Street. The Sunday procession will start at 5.30pm and Denis will be given a hero’s welcome at the Town House at around 6.15pm.

The proud Aberdonian has arrived in the city of his birth in preparation for the honour – and admits the ‘pre-match’ nerves are beginning to kick-in.

Denis said: “When I first heard of the plans to award the Freedom of the City I was amazed – it is the type of thing that happens to other people, with so many great names honoured in the past. I’m proud and feel very privileged.

“Myself and my family are looking forward to Saturday and Sunday immensely and it will be fantastic to have everyone here for the occasion. I don’t mind admitting I’m a little nervous about being part of a ceremony of this importance but it will be a wonderful weekend.”

Centuries of tradition underpin the conferral and during Sunday’s parade Denis will wear a special Scotland cap, complete with the Burgess ticket awarded to the Freeman to confirm his new status.

Lord Provost of Aberdeen Barney Crockett said: “This is the highest honour which the city can bestow and Denis is deserving of the Freedom of Aberdeen. As a sportsman and charity ambassador his achievements are phenomenal and we are delighted to welcome him for a weekend to celebrate all he has done.”

It is the first conferral to take place in Aberdeen since Scotland the What received the honour in 2008 and 18 years since fellow football legend Sir Alex Ferguson was honoured. Previous recipients include international figures such as Mikhail Gorbachev and Nelson and Winnie Mandela as well as eminent UK politicians, including Sir Winston Churchill.

Freedom of the City of Aberdeen: Stage set for weekend celebration of Denis Law