Freedom of the City of Aberdeen: Inspiring a new generation 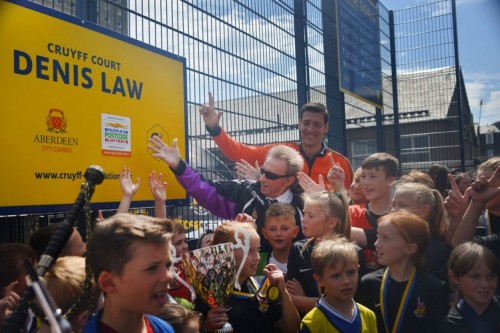 Denis Law will receive the freedom of the City of Aberdeen this weekend.

Following a conferral ceremony on Saturday, the proud Aberdonian will be paraded down Union Street on Sunday and will greet the crowds from the Town House balcony.

The Sunday parade will begin at 5.30pm and the new Freeman is expected to arrive at the Town House at around 6.15pm.

Throughout the week there will be news, features and information relating to the weekend celebrations. Today we look at the causes closest to his heart.

Best known as a sporting superstar and a football ambassador, Denis Law’s impact stretches far beyond the pitches he graced in his playing days.

Many more chapters have been written in what is an inspiring life story since retiring from the world stage as a hero for club and country.

Today the Aberdonian is at the heart of charitable and community endeavours which make a massive impact in the city of his birth as well as nationally.

Meningitis Now and Cancer Research UK have both benefited from the energy and passion of Denis, supporting fundraising and awareness raising initiatives throughout the country.

Locally the Denis Law Legacy Trust has enjoyed enormous success, winning a string of awards in recognition of the work being done in communities throughout Aberdeen. The flagship Streetsport initiative has been central to that success

Last night (22 November) the latest prestigious prize was collected as Streetsport was named TSB Pride of Sport Community Partner Award winner at a ceremony in London. In front of an audience of decorated Olympians and modern-day champions, the name of Denis Law once again came to the fore and his legacy was celebrated.

Whilst Denis shines the spotlight on the valued teams he works with, individual honours have been plentiful.

He was awarded a Commander of the Order of the British Empire (CBE) medal at Buckingham Palace in 2016, honoured for his sporting achievements as well as his charitable work.

An Honorary Doctor of Law was also awarded by the Robert Gordon University to add to honorary degrees from St Andrew’s University and the University of Aberdeen.

Denis has spoken of his pride at the recognition he has received - and also in the positive change the Denis Law Legacy Trust is making in Aberdeen.

The Trust was established to provide young people with free access to sport and other creative activities and help disadvantaged young people achieve positive destinations in life. The charity delivers a range of programmes that are each dedicated to improving and enhancing aspects of the lives of young people throughout Aberdeen. Its overall aim is to support and empower young people to be confident, capable, independent and responsible citizens within their communities.

In his own words, Denis believes the “experience and enjoyment that young people get from sport will stay with them forever” and he looks back on his own childhood with fond memories of the role football played in his life as a boy growing up in Aberdeen.

The charity currently employs two full-time members of staff who are supported by a handful of part-time colleagues and over 50 local volunteers from local communities and the Robert Gordon University student population.The Streetsport initiative delivers free sports and creative activities for young people by deploying mobile activity arenas directly into local communities in the evenings during peak times of anti-social behaviour. The overall aim is to reduce instances of youth crime and anti-social behaviour, promote health and wellbeing and encourage inclusivity through sport, physical activity and creative endeavour.

In some instances the two main barriers to participation in sport are cost and travel. Over the last 10 years Streetsport has helped to eliminate both of these barriers.The majority of the youths the trust targets are not associated with established sports clubs or youth groups and are often considered as territorial. Existing impact measures of the Streetsport programme are notable and in some instances the Denis Law Legacy Trust has helped reduce complaints and instances in youth crime, anti-social behaviour and wilful fire-raising by over 80%.

Activities are intelligence led and targeted at locations in consultation with Police Scotland, the Scottish Fire and Rescue Service and Aberdeen Community Safety Partnership. Levels and reports of crime and anti-social behaviour are monitored and Streetsport’s impact measured.

By demonstrating measurable results in a number of areas including crime reduction, skills development, partnership building and volunteering, the Trust has helped to foster a sense of social value and belonging within many regeneration communities.

The Trust’s team of volunteers has assisted many participants with their own personal development and soft skills including leadership; interaction; negotiation; team working and compromise and improved opportunities for education and employability whilst enabling members of the community to volunteer and gain valuable experience and qualifications that lead to positive destinations.

Aberdeen City Council has worked closely with the Trust in two key projects. The removal of No Ball Games signs from parks and play areas, in an effort to encourage young people to take part in physical activity, was a first for Britain and gained widespread praise. 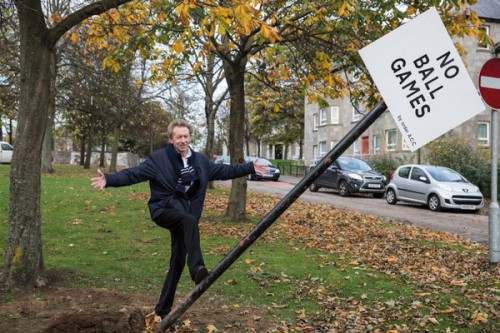 The creation of Scotland’s first Cruyff Court in Aberdeen city centre is the latest collaboration.

Catherine Street Court, a run-down and under-used facility in the city centre, has been transformed into a hi-tech, all-weather play and activity area for families in the surrounding areas and the wider Aberdeen community. It was officially launched in February, becoming the latest of 200 Cruyff Courts in more than 19 countries around the world which support thousands of young people. 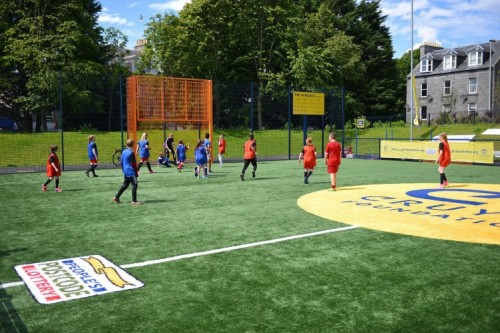 Aberdeen City Council, in partnership with the Denis Law Legacy Trust and the Cruyff Foundation, came together to bring the initiative to the Granite City with a commitment of £200,000 for the work by all three organisations.

Cruyff Court Denis Law, as the facility has been named, offers access to a wide range of free sports and creative activity sessions which include freestyle football, street hockey, dance and art.

Denis was the star attraction at the opening of the innovative facility, with youngsters thrilled to meet the man who put the Aberdeen on the world’s sporting map. The legacy of Denis Law burns brightly in the Granite City - inspiring the next generation.

“To see the reception Denis gets wherever he goes in Aberdeen is fantastic. Every generation can relate to Denis and his warmth, good humour and commitment to the causes so close to his heart always shine through. It has been a pleasure and a privilege to work with Denis and the Trust.

“The Freedom of the City of Aberdeen is the highest honour we have and this weekend is a fitting celebration of the contribution Denis has made on so many different levels.”

Freedom of the City of Aberdeen: Inspiring a new generation