Skip to main content
DSC_0017PP
07/01/08 Stephen Robertson(white checked shirt), George Donald(blue shirt) and Buff Hardie (white shirt red tie),the 'Scotland the What?' team, who are to be given the Freedom of the City in April this year.
ACC_7477FB
20/11/17 Copywork ofpast Freedom of the City recipiants-Nelson mandella-29th November 1984 with Councillor Tom paine, leader of the Council
M1142-14FB
06/12/93-Original on negative-6 December 1993: Mikhail Sergeyevich Gorbachev, former President of the Soviet Union

Freedom of the City of Aberdeen: Denis Law event is part of a proud tradition

Denis Law will join an illustrious roll of honour when the Freedom of the City of Aberdeen is bestowed upon him this weekend.

From international figures such as Mikhail Gorbachev and Nelson and Winnie Mandela to eminent UK politicians, including Sir Winston Churchill, and famous faces from sport and entertainment, including Sir Alex Ferguson and Scotland the What, there is a proud tradition of conferrals in the Granite City. 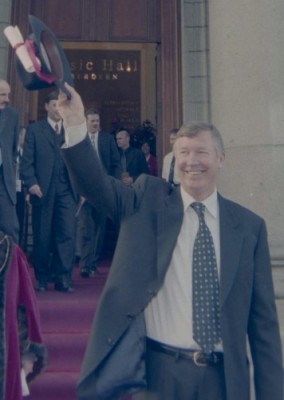 The Freedom of the City is the highest honour that the City of Aberdeen can bestow. It is conferred in a ceremony of ancient origin and is an award made by the Council and citizens of Aberdeen.

Denis Law will be at the centre of his ceremony on Saturday at the Beach Ballroom. The following day he will be paraded down Union Street and will greet the crowds from the Town House balcony. The Sunday parade will begin at 5.30pm and the new Freeman is expected to arrive at the Town House at around 6.15pm.

It is the first conferral to take place in Aberdeen since Scotland the What received the honour in 2008 and it is 18 years since fellow football legend Sir Alex Ferguson was honoured.

The conferral of the Freedom of the City, which may also be referred to as installation as an Honorary Freeman or Free Burgess and Guild Brother, has its origins in 12th Century Scotland. It was the means by which King David I sought to bring order and prosperity to a Kingdom which had recently emerged from a wild and divided land of warring tribes and diverse languages, religion and culture.

The King encouraged the settlement in Scotland of Norman Lords who brought with them organisational skills and military prowess. Stone castles were built and sheriffs appointed to maintain law and order. Trading improved through increased contact with the Continent of Europe and with the arrival in the newly established abbeys and monasteries of monks skilled in trade and cultivation.

The King assisted the establishment of urban settlements called burghs. Many such settlements were founded verbally by Royal proclamation, their existence being confirmed, sometimes years later by a Royal Charter, a document which stated the Burgh’s rights and privileges and the services which the King expected in return.

Aberdeen’s first Charter dates from 1179 but it is almost certain that the Burgh was created sometime earlier.

Burghs were allowed to have fairs and weekly markets, the number and duration of fairs being specified by the King. The more important inhabitants of the Burgh were called Burgesses and to them was granted the exclusive right to trade within a defined area, together with a monopoly of manufacture.

The privileges of a Burgess were great but the obligations could be heavy. A Burgess was expected to reside within the Burgh on his or her own property, to pay a share of all taxes levied upon the town and to own arms and be prepared to use them in defence of the town.

Before being admitted, a Burgess had to take an oath and swear fealty to the monarch, promising to keep the mercantile secrets of the Burgh and avoid unfair trading practices.

Certain people were admitted to the Burgess Roll although they were neither merchants nor craftsmen. These were usually people who had rendered useful service to the Burgh, or who might be expected to do so in the future, and they were admitted as Free Burgesses without payment or fee.

In later years awards became less frequent and more selective, being made “in token of the most devoted love and affection and of the most distinguished respect” and with the recipients being considered Free Burgesses and Guild Brothers, persons on whom the Freedom of the City had been conferred. More recently the Local Government (Scotland) Act 1973, reconfirmed the City Council’s powers to confer the status of Honorary Freeman on persons of distinction.

Denis Law will become the latest great name to become a Freeman, returning to the city of his birth this weekend to be honoured by the people who are proud to call him one of their own.

Freedom of the City of Aberdeen: Denis Law event is part of a proud tradition