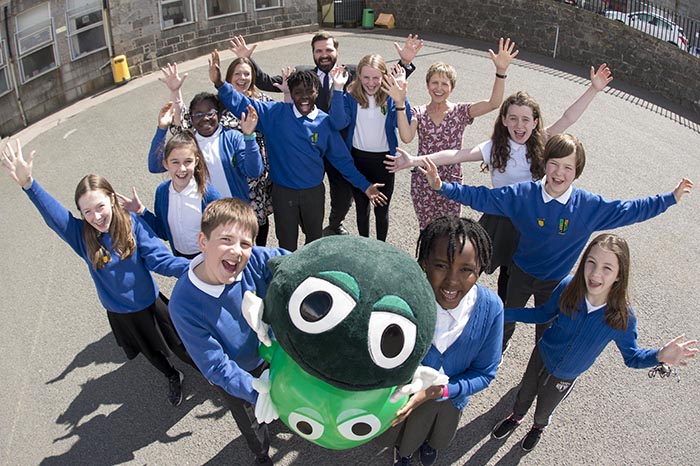 Ferryhill School has won the NSPCC Childhood Champion Award for School of the Year for Scotland it was announced today (Thursday 26 April).

The award is in recognition of outstanding efforts and contribution to the NSPCC and the impact made on children and young people’s lives. The award recognises the school’s support of the charity’s core values.

commitment and support to the NSPCC not only in terms of sponsored events fundraising but also in embracing safeguarding messages.

Ms Whyte also praised the school’s work as a Rights Respecting School and its upholding of NSPCC values on children’s rights along with the work of the Parent Council in relation to the NSPCC’s online safety workshops which saw over 80 adults taking part.

Councillor John Wheeler, Education Operational Delivery Convener, said: “This is yet another fantastic achievement by the pupils, staff and parents at Ferryhill School.

“Only last month we were celebrating Ferryhill becoming the first school in the UK to receive a Gold Award under the new and assessment and rating system for Unicef UK’s Rights Respecting programme. So to achieve even more prestigious national recognition in such a short period of time is truly remarkable. My warmest congratulations go to everyone associated with Ferryhill School.”

Ferryhill School will receive its award from HRH The Countess of Wessex, Patron of the NSPCC, at a special ceremony at the Banking Hall in London on Tuesday 5 June. Dame Esther Rantzen, Founder of Childline, will also be there and the overall UK winner will also be announced.

In her nomination, Ms Whyte said: “My overall experience of working with staff, pupils and parents at Ferryhill School has been an absolute pleasure. The Ferryhill school community is indeed putting children first and clearly show their full support to the NSPCC. They have given more than just raising money. So for these reasons, this is why I believe Ferryhill should be our School of the Year 2018!”