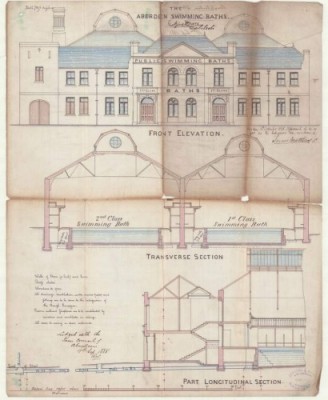 Eight of Aberdeen’s most recognisable buildings will be in the spotlight when a new exhibition opens next week.

The Art of the Building Warrant will celebrate iconic landmarks including the Tivoli Theatre, the University of Aberdeen Student’s Union and the Northern Hotel.

The display will showcase beautifully crafted building warrant plans from Aberdeen’s UNESCO-recognised archive and will run from 3 November to 25 November at 17 on Belmont Street.

Cllr Marie Boulton, Aberdeen City Council’s lead on the City Centre Masterplan and culture spokesperson, said: “The heritage of Aberdeen is a great influence on the future plans for the city and this promises to be a wonderful exhibition which will really capture the imagination.

“Many of the plans on display will be instantly recognisable but there are others that will give an intriguing glimpse at parts of the city which are far less obvious and buildings which have not survived over time.

“In addition to being an important record of Aberdeen’s history, the building warrants are works of art in their own right - showcasing the talent of local and national architect. The Tivoli, for example, was designed by two leading theatrical architects, C.J. Phipps and Frank Matcham.”

The exhibition at 17 is open from 10am to 5pm each Tuesday, Thursday and Friday, from 1.30-5pm each Wednesday and 10am to 4pm each Saturday.