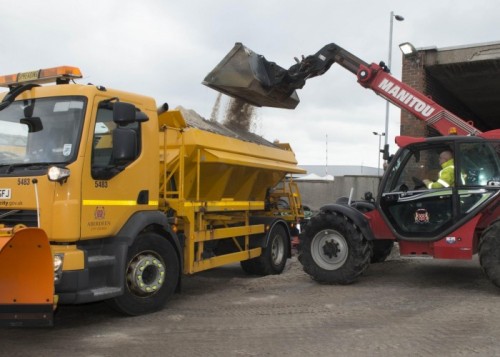 Investment in community grit bins, a review of pavement treatment and plans for the greater use of technology are all part of the preparations for the year ahead as Aberdeen City Council bolsters its winter maintenance programme.

Members of the Operational Delivery Committee yesterday (May 29) agreed to the measures as part of a number of recommendations stemming from a report reviewing the 2017/18 operations.

The Council carried out treatment across 97 days over the winter period as the city encountered prolonged periods of adverse weather. A total of 15,321 tonnes of salt were used during 2017/18 – a significant increase in treatment from the 4,602 tonnes used in the previous year, during milder conditions.

The spend on winter maintenance in 2017/18 was £2.33million – £606,000 over the initial budget due to the difficult conditions, including an increase of £375,000 on salt supplies in comparison to the previous year.

Further investment is planned for 2018/19 to expand the provision of community stocks, with expenditure of £40,000 to install 20 large grit bins in communal areas throughout the city approved by councillors at yesterday’s meeting.

Cllr Ross Grant, Aberdeen City Council transport spokesperson, said: “The 2017/18 winter period was a severe operational test. It is important we learn from the challenges that were undoubtedly evident, whilst appreciating conditions were particularly harsh for a lengthy period. The preparations already being made for winter 2018/19 demonstrate the work being done and the priority being given to such an important aspect of the Council’s service delivery.

“We saw resilience not only from Council staff but also from residents and businesses, showing great community spirit in supporting the efforts to treat pavements and paths. It’s important we encourage that approach and the investment in additional community grit bins is a positive step forward.

“A review of footpath treatment prioritisation and the treatment regime has also been agreed, something I am sure will be welcomed by residents. As a Council we are responsible for more than 1,200km of pavement and the selection of priority routes is a key part of the effective management in winter conditions.

“It is also vital we look at ways of innovating in terms of providing more effective and efficient treatment programmes - something that is at the forefront of the 2018/19 plans.”

A trial of the use of brine and de-icing chemicals, as an alternative to traditional salt, in selected areas over the past winter was successful and will be continued in the year ahead.

Benefits and savings achievable through route optimisation and automated gritting are also to be examined as part of the Council’s wider digital strategy. Automated gritting utilises specialist software to control the spreading of salt from gritters, in place of the current manual process in which drivers control the treatment from inside the cab.