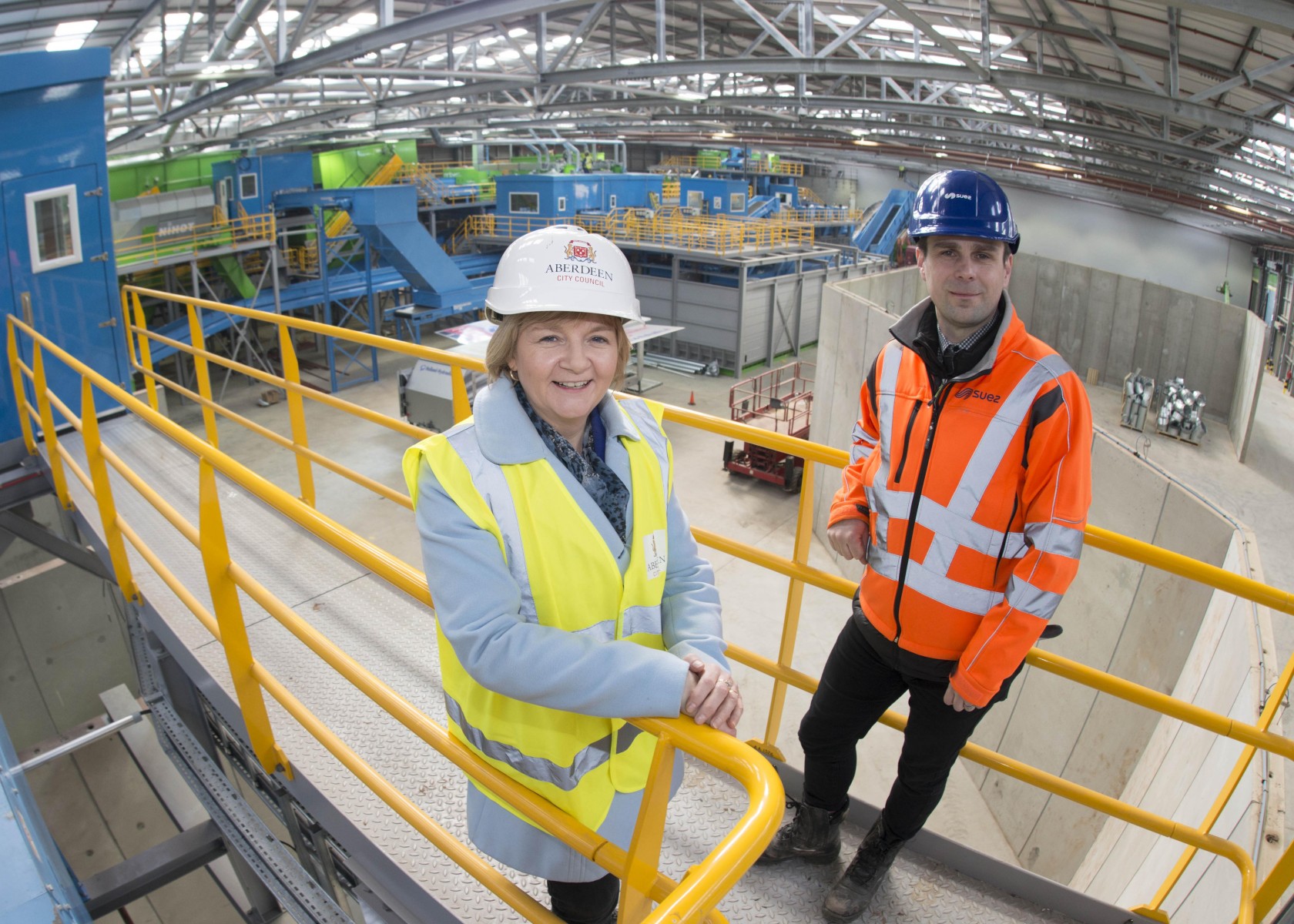 The visit comes in the week that the city’s major new kerbside recycling scheme starts to go live.

The new centre will be the focal point for the city’s recycling scheme which has also seen huge investments in over 70,000 new additional household waste bins and a new fleet of waste collection vehicles.

The Altens East site comprises a Materials Recycling Facility where mixed recyclables, collected from homes and businesses, will be sorted before being forwarded on for re-processing; and a Refuse Derived Fuel Facility that will process residual waste, the waste materials that remain once all viable attempts to recycle them have taken place. Once metals have been extracted and recycled, the remaining material will then be securely baled prior to onward transfer out of the area, where it will be diverted from landfill and put to better use by recovering the energy in the waste to provide heat and power to homes and businesses.

Councillor Laing, said: “It’s fantastic to come along today and see the Mixed Recycling almost ready to go. When we first came here last in September the interior was empty; now with the bulk of the machinery in place, it looks even more impressive.

“We have invested massively in the future of Aberdeen in terms of reducing our environmental impact and landfill taxes while also creating new jobs.

“We have demonstrated our commitment to meeting our environmental targets and now we’d really like everyone in Aberdeen to fully embrace the new waste recycling programme and play their part”.

The Altens East development - which becomes operational in June - is being developed by SUEZ recycling and recovery on behalf of Aberdeen City Council. The facility will divert 71,000 tonnes of Aberdeen’s waste from landfill every year, helping the city to meet Scottish Government recycling and recovery targets and saving residents in the region of £6m in landfill tax per year.

The development represents an investment of approximately £27m in Aberdeen and has employed up to 65 people during construction. A further 40 new, permanent jobs will be created when operations begin in the summer of 2017.

The development site will also include a replacement vehicle depot for the council’s waste collection fleet, which is currently located on Powis Terrace and shared office space for both SUEZ and Aberdeen City Council.

The new facility will also have an Energy Efficiency ‘A rating’, the first City Council building to achieve this standard, and a number of energy efficient techniques have been incorporated into its design, including solar panels on the building roof.. Energy efficient LED lights will be used throughout the site and SUEZ has been working with the manufacturers of its processing equipment to reduce its power demand.