Plans to create a world-renowned multi-use community sports facility in Aberdeen have reached a new milestone as a contractor has been appointed to start work.The new Catherine Street Court will get an extreme make-over to create Scotland’s first Cruyff Court – the brainchild of Dutch footballing legend Johan Cruyff.

Aberdeen City Council on behalf of their partnership with The Denis Law Legacy Trust and the Johan Cruyff Foundation have signed an agreement with contractors Hunter Construction Ltd to carry out the work which is due to begin on site in early October.Hunter Construction Ltd are a local company and are specialists in artificial grass sports pitches.

The Cruyff Court is a hi-tech, all-weather astroturf playing area which gives children and young people from regeneration areas opportunities to play and be active in an urban environment 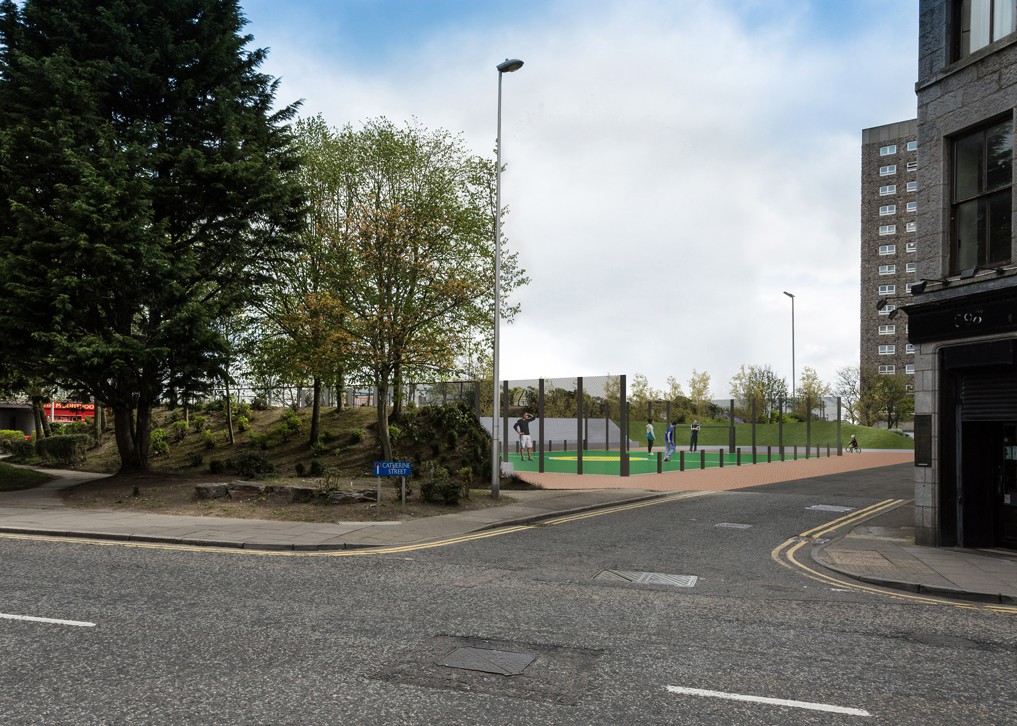 More than £250,000 has been committed by the partnership for the project which will include planned sports activity for all children and young people.

Aberdeen City Council’s spokesman for regeneration Councillor Ross Grant said: “We have reached a new milestone on a project that will offer fantastic new facilities for young people and their families in the city centre and the communities in the surrounding areas.

“The Cruyff Court is a global initiative which recognizes the educational, social and inclusive value the old playing fields brought to our communities and serves as a valid reminder that economic development should not overtake the importance of having community facilities for our children to grow up playing sports and being active in a safe environment.”

The Denis Law Cruyff Court, which has been designed with the help of Communication Design and Architecture students at RGU, will enable access to a wide range of free sessions, including Freestyle Football, Street Hockey and Street Dance.

Denis Law Legacy Trust chairman Graham Thom hailed the progress being made on the Cruyff Court and expressed a hope that it might be the first of many, not only in Aberdeen but throughout Scotland.

He said: "We are determined that we don't want this first Cruyff Court to be a one-off. "There is the potential for others and if we, in Aberdeen, continue to be at the forefront of these facilities being delivered elsewhere then we are convinced this programme will work wonders for communities in various parts of Aberdeen and beyond.

"Statistics show a correlation between sport and encouraging young people to become better citizens which, in the end, is what we are trying to achieve.

"Aberdeen City Council has recognised this and once we have the first court up and running, we will look to the future."

Mr Thom added that establishing the Cruyff Court offered the trust and the Streetsport project it backs, a further opportunity to bring additional services to communities.

"We will continue to target those areas which need our help," he said, "and endeavour to attract those who live outwith the city centre to utilise the Cruyff Court to the full."

The Denis Law Legacy Trust already delivers several activities across the city, including its flagship Streetsport programme which is based at Robert Gordon University.

Streetsport deploys mobile activity arenas, offering free doorstep sports and other events directly to young people within their own communities, including seven local priority neighbourhoods highlighted by the Scottish Government as being in the 15% most deprived areas of Scotland.