Work has started on a £15.2million project to create a new 1,000-space park and ride site and dual carriageway link road near Aberdeen International Airport.

Aberdeen City Council is investing in the project off the A96 Aberdeen to Inverurie road in the latest of a series of infrastructure improvements to tackle congestion and reduce journey times. 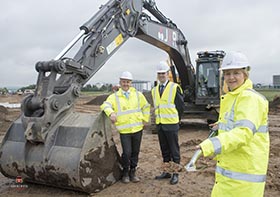 Council leader Jenny Laing was today joined by representatives of Lagan Construction Group, which was awarded the contract for the work, for a sod-cutting ceremony on the site.

The Dyce development will provide space for 1,000 vehicles, as well as waiting accommodation and cycle lockers, along with 500m of dual carriageway between the A96 and Dyce Drive at its junction with Argyll Road.

The road element of the scheme will include footpaths and a shared cycle lane and pedestrian walkway, while the dual carriageway will have three lanes going in each direction.

The northern leg of the link road will be built in the first phase of the project, and is due for completion in November.

The second stage of the development, which will involve the southern leg and the connection to a new roundabout on the A96 to link to the new Aberdeen Western Peripheral Route (AWPR), is due for completion by April 2016.

The park and ride site is due to be completed and open to vehicles by August 2016.

It is the latest in a range of park and ride sites planned on Aberdeen's major commuter corridors.

The project will also improve access to Aberdeen International Airport and relieve pressure on the busy A96, particularly towards the Haudagain roundabout.

Aberdeen City Council Leader Councillor Jenny Laing said: "It is fantastic that we can now see work starting on this crucial piece of major infrastructure.

"It is one of the largest contracts that Aberdeen City Council has signed in recent times and should deliver significant benefits in terms of relieving congestion on the A96.

"It will also provide a boost for the region's economy by freeing up prime development land close the airport and the AWPR.

"Along with the Third Don Crossing and the Berryden Corridor improvements, this is just the latest in a series of major projects which will improve journey times for motorists and bus passengers."

Ben Dempster, Operations Director, Aberdeen International Airport, said: "It's fantastic to see this important project moving along at the pace it is. It is not only great news for passengers and employees at the Airport but for all users of the roads around Dyce Drive.

"I have no doubt that peak times will be far less congested as a result of the improvements which, in turn, will lead to much shorter journey times for people wishing to visit the area."