A city centre monument is being restored and buildings on Union Street repaired as part of the on-going effort to regenerate the heart of Aberdeen.

The work, supported by the Aberdeen City Heritage Trust, aligns with the City Centre Masterplan’s goal of conserving and showcasing heritage.

A traditional shopfront has been reinstated at 148 Union Street, while roofing repairs have started at 23-25 Union Street (above the Tourist Office), window repairs are underway at Dee Street (fronting Union Street), with a further Union Street repair scheme currently being finalised.

The Hamilton Monument (pictured below in 2006) in St Nicholas Kirkyard on Union Street will benefit from £15,000 of repair work, which will start this month.

The monument was built in 1833 in memory of Dr Robert Hamilton (1743 -1829), Professor of Natural Philosophy and Mathematics at Marischal College, and paid for by public subscription in recognition of his humanitarian work, which included helping to improve Aberdeen’s water supplies and campaigning for the abolition of slavery.

The memorial is made from granite with a marble dedication plaque. It was designed by architect John Smith (1781 –1852), who was also responsible for the screen to the front of the Kirkyard.

Aberdeen City Heritage Trust has commissioned a specialist team of conservation architects and contractors to repoint and repair the memorial, and to reinstate the urn atop the plinth along with the perimeter iron bars. Work is scheduled to start at the end of April.

The Trust is supported by Historic Environment Scotland and Aberdeen City Council.

Lord Provost Barney Crockett, who is Trust Vice-Chair, said: “Though Aberdeen as a city has changed enormously in recent decades, Union Street has continued to be its beating heart.

“That’s why it was given centre stage in the City Centre Masterplan.

“By working in partnership with organisations like the Aberdeen City Heritage Trust and Historic Environment Scotland, as well as property owners and occupiers, the Council is helping to conserve our heritage for generations to come.

“The restoration of the Hamilton Memorial will showcase not just Aberdeen’s architecture wealth but its rich social and scientific history.” 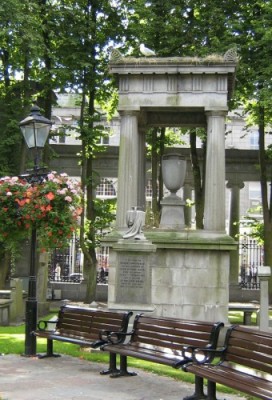 In all, a dozen Trust projects are being taken forward across the city, the majority involving roofing works which unchecked would have led to significant deterioration.

In future, work to improve historic buildings on Union Street will be supported through the Union Street Conservation Area Regeneration Scheme, which was launched in November last year and runs until 2022.

Aberdeen City Council and Historic Environment Scotland have each contributed £1.17m to the scheme and a further £50,000 was provided by Aberdeen inspired, the banner under which the Business Improvement District operates.

Union Street CARS marks the next step in transforming Aberdeen’s main thoroughfare under the 25-year City Centre Masterplan, which in the longer term envisages pedestrianisation priority along part of its length

Work to date has included improvements to street furniture and the introducion of an enhanced cleaning regime, with the most recent deep cleaning taking place last month.