A campaign aimed at helping people who feel unsafe on dates has launched in Aberdeen pubs, clubs and entertainment venues.

From this weekend (10 March) people visiting Unight Aberdeen venues will be encouraged to ‘Ask for Angela’ at the bar if they feel uneasy during a date.

The code-word aims to notify bar staff to situations where people may feel uncomfortable or unsafe. Once alerted bar staff will then call a taxi or help the person leave discreetly. 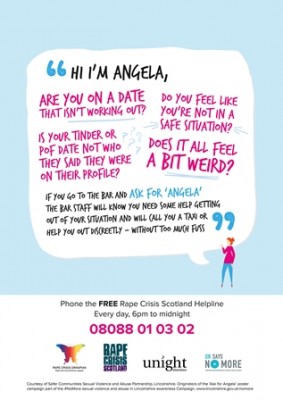 Posters advertising the campaign will be in both male and female toilets and promoted via social media. More than 25 city venues taking part in the campaign.

Aberdeen City Council Licensing Board convener and Deputy Leader Councillor Marie Boulton said: “I am delighted that we have now launched the Ask for Angela campaign in Aberdeen. It has been hugely successful in Lincolnshire and well received from people across the UK and worldwide.

“This initiative is another example of the great work undertaken by community safety partners aimed at ensuring a safe night time experience for residents and visitors to Aberdeen.”

A Rape Crisis Grampian spokeswoman said: “As an organisation Rape Crisis Grampian supports those that are survivors of rape and sexual violence. We are extremely keen to promote prevention and are so happy that the Community Safety Partnership, Police Scotland and Unight Aberdeen have all come together to back this campaign. We hope it will be well received and help to support the night-time safety of Aberdeen city further.

“We hope that the Ask for Angela posters will give both men and women the confidence to ask for help and support and know that someone is there to help them.”

The Licensing Inspector for Police Scotland North East Division, Inspector Kenny McGeough said “This is a very positive campaign which has been widely supported by the licensed trade, who also recognise the importance of promoting public safety and protecting people from harm whilst within licensed premises'.

“Police Scotland continues to experience a very strong and meaningful partnership with the licensed venues (Unight) and the joint approach for the 'Ask for Angela' campaign is a great example of this.”

The campaign is the brainchild of Lincolnshire County Council and has since been adopted by other councils across the UK. The campaign even caught the attention of Hollywood star Ashton Kutcher who shared a photo of the poster on his Twitter account.

The Unight Aberdeen venues taking part in Ask for Angela are: