Residents in three Aberdeen multi-storeys have had their say on how £100,000 will be invested in their buildings and surrounding areas.

As part of its participatory budgeting programme, known as UDECIDE, Aberdeen City Council asked occupiers of Promenade, Regent and Linksfield Courts to vote for their top three priorities for improving the 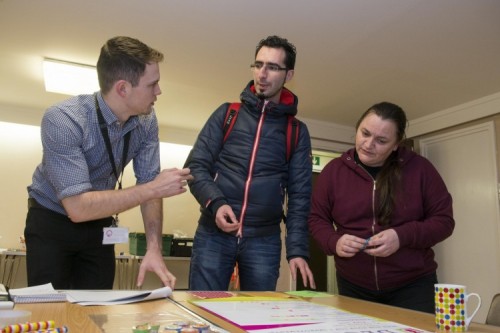 Almost half (153) of all households in the three blocks voted for their desired improvements by either attending a voting day held in each multi-storey or by completing a postal vote. The most popular options were; replacing the flooring in each building, a deep clean of each multi block and painting the inside of each building. Other votes went to installing fob access at the rear doors of each building and installing planters and benches outside the buildings.

Decoration work will begin at Linksfield Court in February followed by Regent Court and then Promenade Court. After that the Council will conduct a thorough clean of each building and then replace the flooring in all three buildings.

Fob access to the rear doors will be installed once the new front and back doors are fitted in spring.

In addition to the UDECIDE project the three buildings have been undergoing a transformation outside with overcladding and new windows being installed. Once this work is completed along with improvement works to the ground floor foyers, a review of the outside space will take place with consideration given to installing planters and benches.

Aberdeen City Council Leader Councillor Jenny Laing said: “The funding available via our UDECIDE programme has allowed our tenants and residents to address the issues that are most important to them.

“All of our participatory budgeting projects have been very well received and have generated a great deal of interest and excitement in local areas where engagement with the Council has previously been low.

“I hope the residents of Promenade, Regent and Linksfield Courts are pleased with the outcome of their voting days. I look forward to seeing the improvements to these buildings in due course.”

There are various participatory budgeting projects underway across the city. A total of £250,000 is available to projects in three localities; Torry; Middlefield, Northfield, Cummings Park, Heathryfold and Mastrick; and Tillydrone, Woodside and Seaton. The successful projects in each locality will be announced in March, visit https://aberdeen.participare.io for more information. Another £30,000 is available to upgrade and improve unused green space within the heart of Torry.