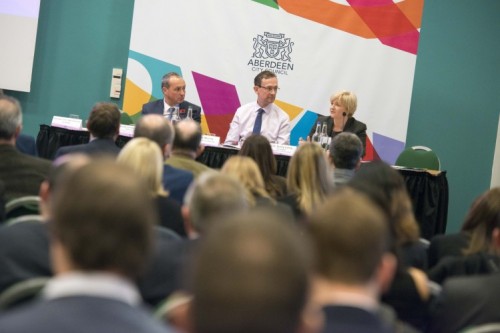 Sir Howard Bernstein has been confirmed as a keynote speaker at next month’s State of the Cities Conference hosted by Aberdeen City Council.

Sir Howard will be joined by Deirdre Michie, Oil and Gas UK Chief Executive, and Chris Murray, Director of Core Cities, in addressing delegates as part of a programme that will mark the publication of the second annual report by the Economic Policy Panel formed to advise on the city and regional economy.

Registrations are now being taken for the event on 5 November at P&J Live and places can be reserved here.

Sir Howard, who led Manchester’s transformation as Chief Executive of the city’s council from 1998 to 2017, will focus on Aberdeen’s response to its economic experiences. Deirdre Michie will present on the importance of place in the UK’s energy transition and Chris Murray on the economic and social benefits of place-based policy.

Cllr Lumsden, who also serves as Convener of the Council’s City Growth and Resources Committee, said: “We are delighted to welcome such prominent speakers to this year’s conference and it promises to be an informative and inspiring event. The programme is built around important challenges and opportunities for Aberdeen and is a fantastic platform as we aim to build for the future.”

Cllr Laing said: “The introduction of the Economic Policy Panel has been another important indication of the Council’s commitment to inclusive economic growth. The impartial and expert advice provided by the panel helps to shape the Regional Economic Strategy and we look forward to receiving this year’s report and discussing the findings in depth at the State of the Cities Conference.”

The panel’s first annual report was issued last year and pointed to an outlook of cautious optimism as well as the potential for growth in the years ahead.

Sir Howard Bernstein said: “Aberdeen has recognised and responded thoughtfully to the evolving macroeconomic landscape and needs of its population. However, a joined-up public-private approach is critical for realising its future potential, so this year's conference must focus on aligning around a set of shared priorities that deliver for all aspects of the city region.”

Graham Hollis, from Deloitte, said: “I’m delighted that our Strategic Business Adviser to Deloitte Sir Howard Bernstein is coming to Aberdeen once again to share his insights and expertise from his 20 year tenure as Chief Executive of Manchester City Council, and his reinvention of that city to the powerhouse it is today. He will also have the opportunity to hear of the progress made around Aberdeen’s strategy for growth, innovation and the diversification of its economy since his last visit in 2018.”

Deirdre Michie said: “The UK’s oil and gas industry owes a great deal of its success to Aberdeen City and Shire and this conference will show how we can continue to work together to realise an exciting future as outlined in Roadmap 2035. With our industry in action to meet UK energy demand, support net zero and develop a diverse and talented workforce, Aberdeen has a golden opportunity to emerge as an energy city of the future. From pioneering hydrogen buses to providing quality of life with great jobs in international companies, Aberdeen is very much a city in transition to support an industry in transition.”

Chris Murray added: “The Aberdeen City Region Deal is a major step forward in recognising the role of place-based policy in driving economic growth for the area. There are however big opportunities but also challenges ahead, and Aberdeen, no less than other cities, needs the right tools and powers available to it to address these in an increasingly complex environment. This conference comes at an important moment to ask: what tools are needed, and how can they be put in place?”