...and looks to Australia for inspiration

Proposals to help Aberdeen shine as never before are to be drawn up under the City Centre Masterplan (CCMP) – with a project to showcase statues, gateways, civic spaces and landmark buildings.

“Aberdeen in Colour” aims to raise the city’s profile by lighting its unique architecture and streetscape. It could also improve wayfinding and enhance cultural experiences while boosting security, social interaction and inclusiveness.

Specialist firm Steensen Varming have been appointed to develop the creative lighting strategy and implementation plan after a competitive tendering process. The award-winning design consultancy was formed in 1933 and has illuminated World Heritage Sites, including Sydney Opera House (main picture).

The project is being brought forward by Aberdeen City Council and Aberdeen Inspired, operator of the Business Improvement District.

Councillor Marie Boulton, Aberdeen City Council’s lead on the City Centre, said: “We are delighted be driving ahead with this City Centre Masterplan project, which has the potential to animate Aberdeen in spectacular new ways, whatever time of day or year.

“We are especially pleased to have secured the services of Steensen Varming, a company with a global reputation for bringing cities and civic spaces to life in a way that is designed around people and respects the character of the setting.

“These installations could help us build on initiatives like SPECTRA, our hugely-successful annual lighting festival, and even become works of art in themselves. The Council is delighted to be working in partnership with Aberdeen Inspired on this project and it will be exciting to see the proposals forward for consideration."

Adrian Watson, chief executive of Aberdeen Inspired, said: "Aberdeen Inspired is committed to seeing the CCMP move forward, with the Aberdeen In Colour workstream another example where the organisation will meaningfully work with Aberdeen City Council and others to ensure the transformation continues.

"The benefits of a creative lighting strategy for our City Centre will be there for all to see and will put us to the fore in national terms, exactly where we ought to be."

The CCMP – unanimously adopted by Aberdeen City Council in 2015 – said “Aberdeen in Colour” could drive the night-time economy and “identify opportunities to raise the profile of Aberdeen at home and further afield”.

New and historic buildings could become part of the project, with dynamic and interactive approaches to lighting considered. In keeping with the CCMP’s “Living City for Everyone” theme, “Aberdeen in Colour” would be designed to support visually-impaired people, creating a sense of belonging for all residents and visitors.

Energy efficient lighting would be used and the project would, where possible, integrate with Aberdeen’s Digital Strategy. The proposals will also consider residential amenity and analyse the effect on the city’s skyline.

In addition “Aberdeen in Colour” would highlight potential linkages with the “Aberdeen 365” events programme and look to complement the overall Masterplan programme so benefits across projects can be locked in.

A public engagement exercise is to be held to help inform the strategy, which is expected to be completed in early 2018 and will include costings. In due course the proposals will go to councillors, who would decide whether or not to progress the plans.

Steensen Varming have delivered high-profile Lighting Masterplans and Creative Lighting Projects for cities and significant sites across the world, winning awards and accolades.

Sites include Harvard University (Dumbarton Oaks campus) in the United States, the Hong Kong University of Science and Technology, and the Banktown Civic Precinct in Sydney (below). 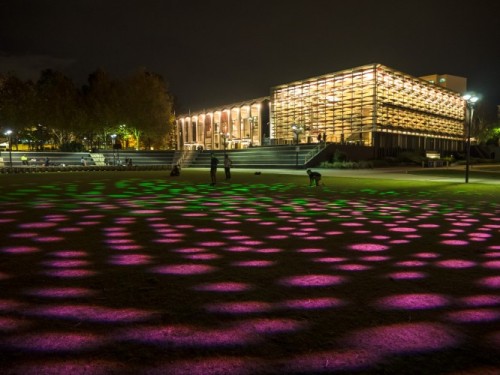 After touring Aberdeen’s city centre, Team Leader Mirjam Roos from Steensen Varming said: “We are honoured to have the opportunity to work together with Aberdeen City Council to transform the city’s night-scape through the power of light.