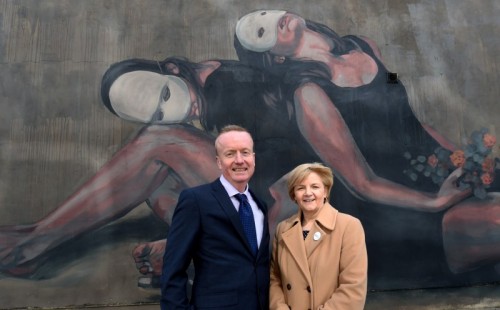 Large crowds will gather in Aberdeen this weekend for the award-winning international Nuart Aberdeen street art festival which has transformed walls across the city centre.

Artists are applying the finishing touches to their works which organisers say will surprise and delight members of the public.

The festival, which is delivered by business organisation Aberdeen Inspired in partnership with Nuart Festival and Aberdeen City Council, is now in its second year.

It has once again seen a team of international, national and local artists develop their latest works on walls around the city centre. Festival artists from Argentina, Lithuania, Norway, Portugal and the UK have been working across the city centre throughout the week.

The theme for this year’s festival is ‘A Revolution of the Ordinary’ which will investigate the parallel world of non-institutional art and culture through an extensive program of artist talks and debates, film screenings, guided tours, workshops and satellite events.

Nuart Aberdeen’s public opening will be held at The Green at noon on Saturday (April 14). It will feature live music, performances and will people will have the chance to purchase exclusive Nuart Aberdeen merchandise.

On both Saturday and Sunday, 90-minute walking tours of the latest street art will be provided at 1pm and 2pm. Festival guides will take groups on a walk from Aberdeen city centre to the west end; taking in large-scale murals as well as the smaller, hidden artworks created at this year’s festival.

Aberdeen City Council Co-Leader Cllr Jenny Laing (pictured above, image courtesy of the Press and Journal) said: “It is so exciting to see the artwork for Nuart Aberdeen around the city and it’s sure to be a fantastic launch weekend with thousands of visitors coming out to see the spectacular street art.

“Aberdeen is a dynamic city which offers a great deal for both residents and visitors, and as a Council we are proud to be investing £300,000 over three years to support Nuart Aberdeen.

“Through our City Centre Masterplan Aberdeen City Council is committed to making Aberdeen an even more vibrant place to live, work and visit – and a year-round events programme is integral to that.

“Nuart Aberdeen is an exciting addition to the events programme which provides an opportunity to promote and enhance the long-term economic prosperity of Aberdeen and the wider region by attracting visitors, both local and from further afield.”

Adrian Watson, chief executive of Aberdeen Inspired (pictured above), said: “Our festival artists are putting the finishing touches to their works and very we’re excited to see the end results on walls across the city centre which are sure to surprise and delight.

“We’ve delivered a fantastic festival programme of events which has something for all the family and offers opportunities for people to get involved. It is the only street art festival of this scale in Scotland and considered to be one of the best in the UK and beyond.

“The debut festival was an overwhelming success in 2017 and we plan to build on that with everything that’s on offer this year."

Held in the Norwegian city of Stavanger since 2001 and widely regarded as the world’s leading celebration of street art, Nuart Aberdeen is the first and only overseas version of the festival, first hosted in Aberdeen in 2017 to widespread acclaim.

James Finucane, Nuart Aberdeen festival manager, said: “The feedback we’ve received from the public both on the streets and online has been wonderful to hear and read.

“Last year’s event really seems to have given the local population a taste for street art, and it’s this engagement and debate that the work generates that really gives street art it’s longevity.

“We hope that people will take up the opportunity to hear directly from this year’s artists about their creations and the inspirations behind them, as well as the film screenings, workshops and tours that together provide the wider context for the physical works being produced on the street.”

Aberdeen City Council recently committed to providing funding for Nuart Aberdeen which will see the local authority provide £300,000 over the next three years.

It also won the place management BID award at the 2017 National Business Improvement District (BID) Awards and was also the signature piece Aberdeen Inspired’s winning entry to secure the 2017 European BID of the Year win in July.

Nuart Aberdeen is supported by presenting partners Burness Paull and Aberdeen Standard Investments alongside a growing community of independent local partners and suppliers.

For more information about Nuart Aberdeen 2018 and to view the festival programme, please visit: www.nuartaberdeen.co.uk