Chance to relive the magic of Nuart Aberdeen Festival

The organisers of an international street art festival in Aberdeen have released a video capturing the excitement and scale of the event.

A team of internationally acclaimed artists demonstrated their talents by creating dazzling murals around the city centre, drawing massive crowds over the Easter weekend in April.

Nuart Aberdeen was brought to the city by business organisation Aberdeen Inspired and Aberdeen City Council under the auspices of the City Centre Masterplan.

The Lord Provost of Aberdeen Barney Crocket said: “Nuart revealed Aberdeen to be truly global in its cultural reach and influence.

“The official film offers an insight into the event’s amazing artistry and the buzz it generated.

“The City Centre Masterplan’s ‘Aberdeen 365’ project will build on the success of Nuart with more events that showcase the city and its possibilities.” 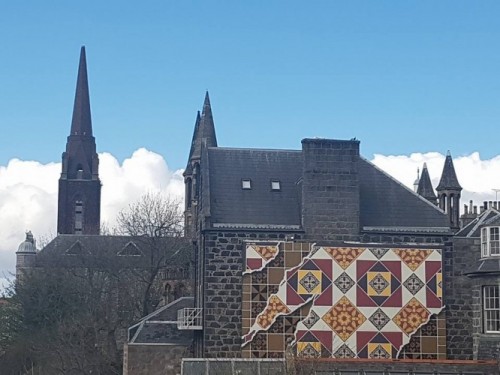 Nuart Aberdeen was the first overseas version of the festival, which had been held in the Norwegian city of Stavanger since 2001. The video was made by Fifth Wall TV.

Aberdeen Inspired chief executive Adrian Watson said: “The response to Nuart Aberdeen – The Movie has been overwhelming, reaching over 75,000 people around the world shortly after its release.

“Nuart is a great example of what a city can achieve when it thinks big and we look forward to inviting them back next year.

“With walking tours set to kick off, there will be plenty of opportunities for the residents and visitors to enjoy the artworks during the summer months.”

They worked alongside local artists to brighten up buildings with thought-provoking murals, leaving a legacy for residents and visitors to marvel at and enjoy.

The video was made by Fifth Wall TV.

Chance to relive the magic of Nuart Aberdeen Festival