A trial to create a café culture in an Aberdeen city centre street is to start next month.

Belmont Street, Little Belmont Street and Gaelic Lane are to be closed to almost all traffic from 11am to 6pm, seven days a week. 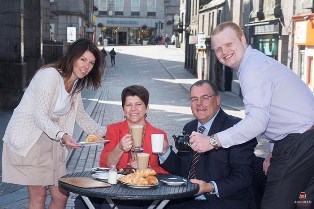 Aberdeen City Council is creating the space in response to café owners' requests, and there  will be a series of events in the streets to encourage residents and visitors to go to the area. It is also aimed to have free public wi-fi.

Aberdeen City Council Deputy Leader Marie Boulton said: "The café culture in the Belmont Street area will create a really nice family friendly atmosphere and will add to what is already a popular part of the city.

"With very little traffic between 11am and 6pm, the area will be a safe place for families, residents and visitors to go to for a coffee or tea and cake and watch the world go by, and also see cultural events at the same time.

"There are cities in Scotland and others all over northern Europe with a similar climate to Aberdeen which have a strong and vibrant café culture  that's what we'd love to help create here."

Jamie Hutcheon, director of Cocoa Ooze on Belmont Street, said: "Since opening the doors of our flagship store back in 2013, we have been approached by many of our loyal customers asking why we didn't have any tables and chairs outside for them to enjoy their drinks and lunches while taking in the atmosphere of the hustle and bustle of a lively street. They often ask us why it is such a strong culture in other cities such as Edinburgh and Glasgow but in Aberdeen we are left with very few choices.

"It seems like we've really been missing out on an opportunity to develop the café culture in the city centre, so I strongly welcome this pilot which should attract additional numbers of people to what is the cultural heart of the city centre. Not only will this benefit our local business but also all the other businesses in the area."

Angela Kozak, director of Cup Tea Salon in Little Belmont Street, said: "This idea is very welcome indeed. The Merchant Quarter and the Cup Tea Salon lie at the very centre of Aberdeen so it makes sense to capitalise on our heritage and make this THE place to go for an alfresco social experience in a real cosmopolitan city.

"Where Aberdeen leads the way in the oil and gas industry perspective, it has so far lagged behind in the cosmopolitan alfresco dining experience.

"I'd like for the area to be jam packed and act as the focus for people to meet up for coffee, quick lunch break with friends and family. The potential lies beyond the three months of summer and Cup Tea Salon is delighted to be part of this exciting venture."

The feasibility of a trial with the City Council for the café zone was put forward by business organisation Aberdeen Inspired after learning of a demand from the city centre business community.

Aberdeen Inspired chief executive Gary Craig said: "Aberdeen's city centre has such a strong offering in terms of the diverse range of cafés available in the area and through speaking to the business community; we've identified a requirement by many to introduce outside seating to their premises.

"The lack of café culture within the city is often raised by both the hospitality trade and city centre visitors so we're delighted to have played a role in pushing for this trial. I'm sure it will be a welcome addition to Belmont Street and the surrounding area.

"A vibrant café culture is at the centre of all major European cities and this is a positive step in helping further develop a cosmopolitan atmosphere at the heart of Aberdeen."

The only traffic allowed through at the time will be for drivers using two private parking areas. Four Blue Badge spaces are being relocated, three which will be 590ft to new bays on Schoolhill and another which will be 285ft to a new bay on Back Wynd.

The closure will be in place from Monday August 3, for the summer and autumn months. Cultural use will also be encouraged from art, music, and street performers.

Businesses in the streets wanting to take part in the trial have to apply for a licence from Aberdeen City Council. No alcohol will be allowed on the seated areas, as all alcohol has to be consumed on licenced premises.

The trial will last for an initial three months, and has the potential to become permanent if it proves successful.