Grants to help restore and enhance historic properties are being offered to owners through a Conservation Area Regeneration Scheme (CARS), subject to meeting eligibility criteria.

The five-year programme is being rolled out by Aberdeen City Council after it was awarded £1,177,104 by Historic Environment Scotland (HES) earlier this year. The Council matched this sum. A further £50,000 is being provided by Aberdeen inspired, the banner under which the Business Improvement District Operates, bringing the total pot to £2,404,208.

The scheme encourages work – ranging from shopfront improvements to the reinstatement of architectural features – that employs traditional materials and methods.

Project CM11 Union Street Conservation Area Improvement Scheme aims “to promote the conservation and enhancement of the special historic and architectural heritage of Union Street and to maximise its economic and social value”.

Dozens of interested parties gathered today at the Town and County Hall to learn more about the scheme.

Councillor Marie Boulton, the Council’s lead on the city centre, said: “Aberdeen City Council is delighted to have received support from Historic Environment Scotland and Aberdeen Inspired in looking to improve the fabric of our historic buildings.

“The scheme could stimulate significant long-term investment in Union Street by encouraging occupancy of both vacant commercial units and vacant upper floors potentially for residential use.”

Lord Provost Barney Crocket, a member of Aberdeen City Heritage Society, said: “Union Street has always had a special place in the heart of Aberdonians. This scheme promises to improve our heritage and what is one of Europe's great streets.

“I am extremely pleased that the Heritage Society is so closely involved and that it will continue to be.”

HES chief executive Alex Paterson said: “We’re proud to be able to financially support this regeneration project in what is one of Scotland’s great historic thoroughfares.

“The HES grant and investment goes beyond just supporting the local economy: by additionally helping to ensure that traditional skills and trades continue to be encouraged. Moreover, existing businesses will also have the opportunity to enhance their shopfronts to attract visitors and place the city’s heritage very much at the fore of its present and future.”

Aberdeen Inspired chief executive Adrian Watson said: “Aberdeen Inspired is committed to supporting this £2 million plus project that will effectively offer businesses the financial impetus to look seriously at restoring and/or enhancing their buildings on our main thoroughfare.

“We all know that the issue of Union Street’s current state is one that provokes much debate, but here is a very real opportunity for the owners to grab the initiative and realise more of the potential that this historic and great street offers.” 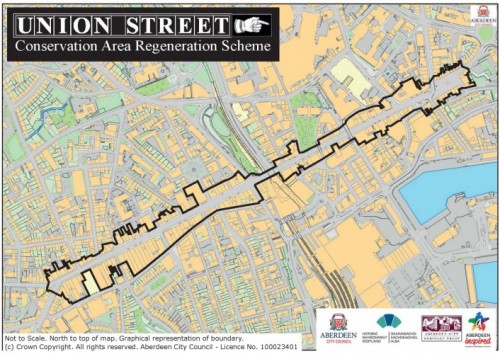 The scheme covers the Union Street Conservation Area (above), which includes Holburn Junction and the Castlegate. Subject to meeting criteria, grants will cover up to 60% of repairs and 75% of shopfront improvements, with owners expected to meet the rest of the cost.

It has been estimated that CARS Union Street could result in a total investment of around £3.6 million if there was full uptake among owners.

A Union Street CARS Officer has been appointed by the Council to manage the scheme. A rooftop survey is to be carried out to help determine the condition of properties and identify priority buildings, which is a requirement of the scheme and will inform decisions about the awarding of grants.

Conditions will be attached to grants, including a commitment to future maintenance of the properties.