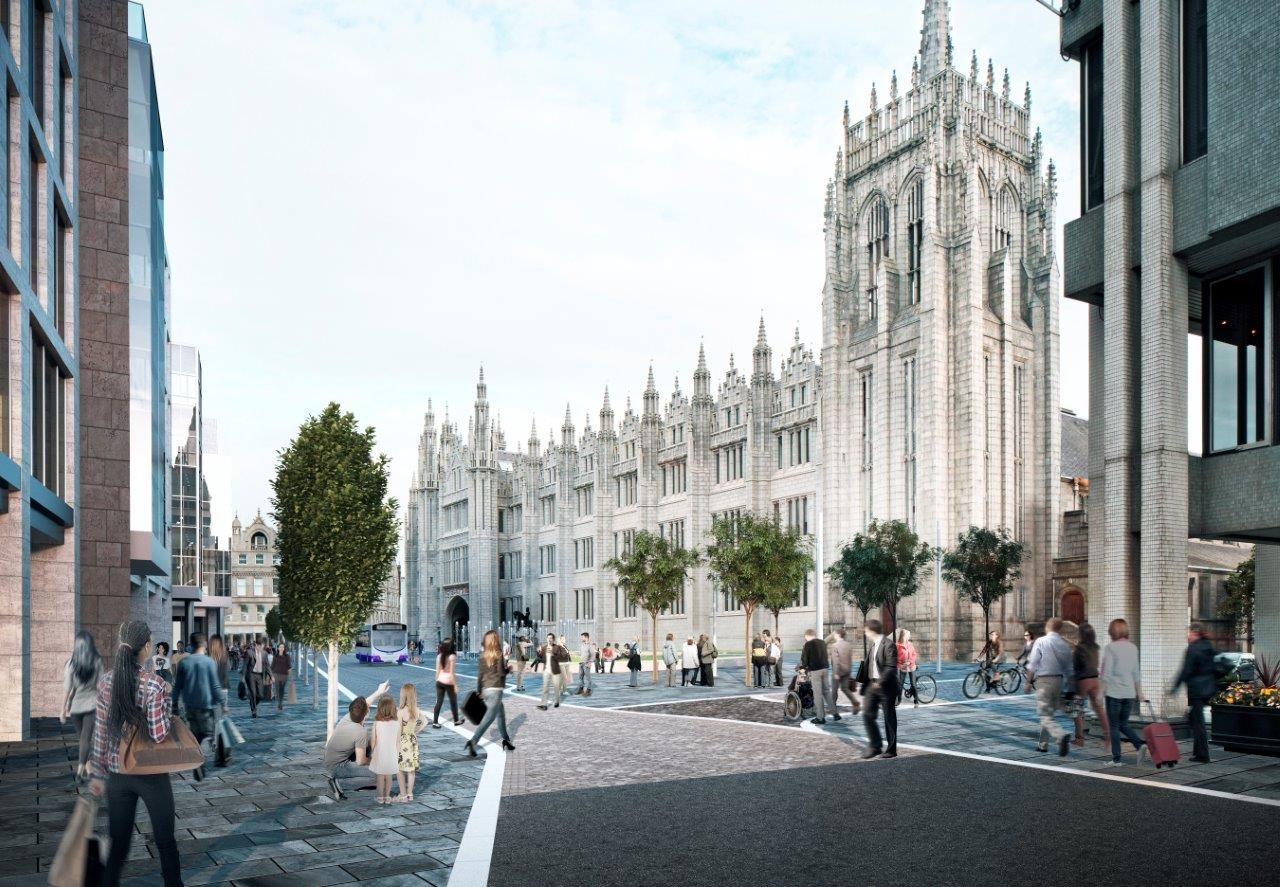 Exciting new plans to revitalise Broad Street as part of the City Centre Masterplan were given the go-ahead at a Full Council meeting today.

Councillors agreed to a detailed design of what the pedestrian-priority area will have in it, at a Full Council committee in the Town House.

The plans include a transformed and improved streetscape which will extend to Union Street and include the Gallowgate/Upperkirkgate junction, creating an area with interest, vibrancy and vitality.

The space, which will be buses-only for traffic and a shared footway for pedestrians and cyclists, can be used for a range of events that can be programmed throughout the year.

The design’s key points include a water feature, a raised grass planter giving a space to relax and enjoy the view of Marischal College, several trees to introduce greenery, and a granite bench seating defining some of the areas.

There will also be improvements in lighting to Marischal College allowing greater flexibility in uplighting and ‘theming’ the building and also allowing it to be integrated with lighting to the new water feature. The Robert the Bruce statue will remain in its original position, and servicing for events will be built into the scheme to allow for a multi-use space.

“More than 1,000 people took part in the Broad Street consultation and their feedback helped shape the design work, both in terms of the layout and features.

“The creation of exciting new public realm and event space will further improve the Aberdeen’s offering for residents and visitors and we’re delighted to be delivering on the vision of a safer, cleaner, more vibrant city centre.”

The new designs for Broad Street have also taken into consideration people with sensory disabilities and mobility issues, with thought put into the colour, texture and the overall design of the footways and roads so they are distinguishable.

Informal pedestrian crossing points are identified with tactile paving on the footway and be paved in a contrasting material to assist in identifying them to people with visual impairment. The design also takes into consideration tree heights, car parking, street lighting and street furniture.

The plans include the shared pedestrian/cycle pavement extending towards Union Street with the existing Caithness paving, the traffic lights at Upperkirkgate and Gallowgate to be removed and replaced with a shared surface for vehicles and a roundel (a mini-roundabout with a road surface feature that indicates roundabout driving rules apply and pedestrians are given priority), and a Toucan crossing (pedestrian/cycle crossing) created at the Union Street/Broad Street junction.

A two-stage tender process will now be undertaken with the ambition to have a contractor in place in early November 2016, and a preferred contractor in place during December. It is anticipated that work would start on site in early February with a six-month programme, with Broad Street between Upperkirkgate and Queen Street closed for the entire duration.

The cost of the design work, traffic order and construction is likely to be met in full by the money contributed by Muse for public realm work on Broad Street, Sustrans contribution, developer obligations money to improve Core Paths, and CCMP capital money.