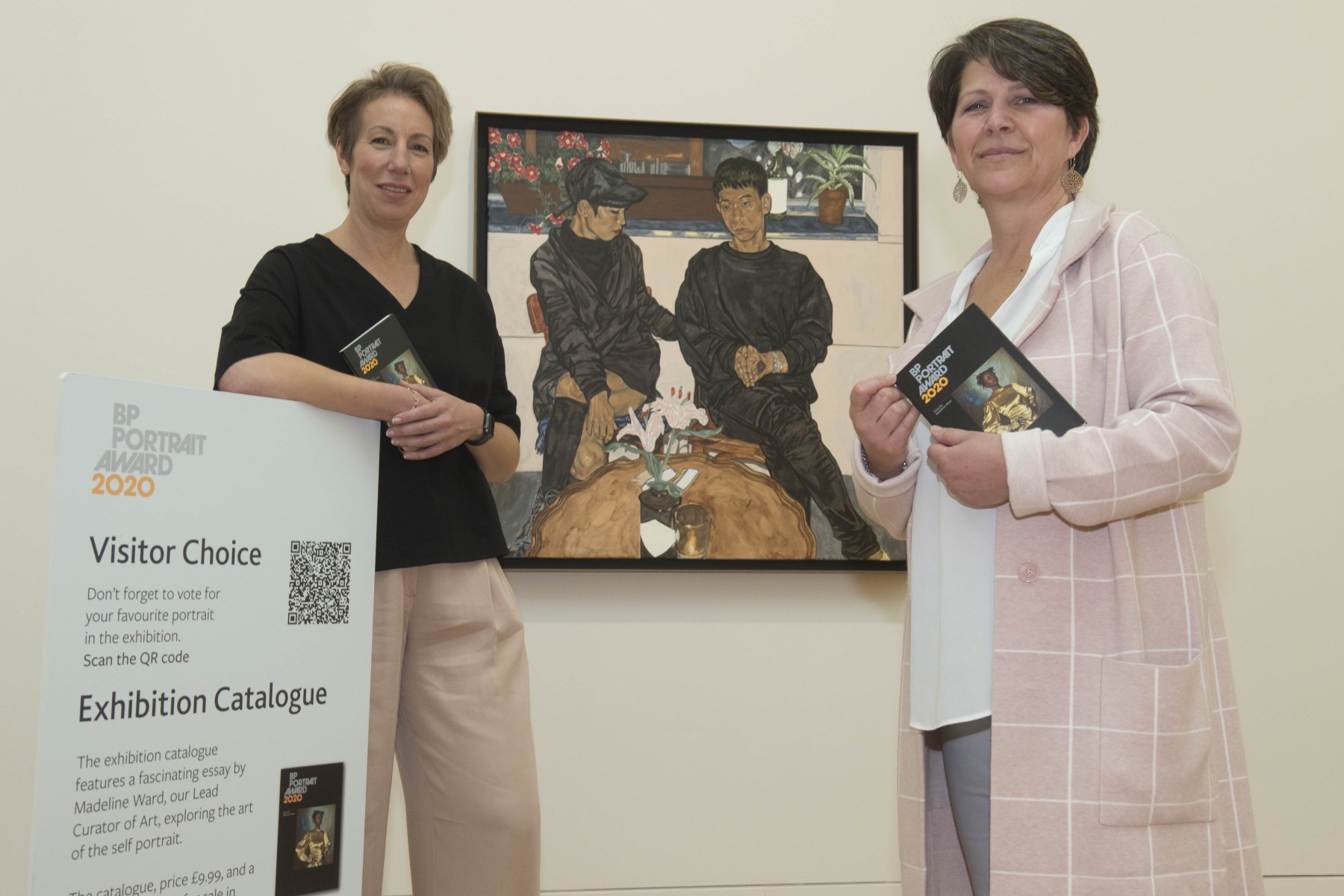 ACC_2680
08/10/20 Madeline Ward- Lead Curator & Councillor Marie Boulton-Aberdeen City Council culture spokesperson An unmissable highlight in the annual art calendar, this year Aberdeen Art Gallery is the only UK venue to host the most world’s most prestigious portrait painting competition. The BP Portrait Award makes a welcome return to Aberdeen, where it will be presented for the first time in the BP Galleries on the stunning new top floor of the redeveloped Art Gallery.With a first prize of £35,000, and a total prize fund of £74,000, the Award is aimed at encouraging artists to focus upon and develop portraiture in their work. Exclusive first view for media in advance of the public opening on 10 October. Interview opportunities with Aberdeen City Council culture spokesperson Cllr Marie Boulton and Aberdeen Art Gallery & Museums’ Lead Curator, Madeline Ward.

The prestigious BP Portrait Award – an unmissable highlight in the annual art calendar – is making a welcome return to Aberdeen Art Gallery, the only UK venue for the 2020 exhibition. A planned exhibition at the National Portrait Gallery in London moved online earlier this year due to the Covid-19 pandemic.

Organised by the National Portrait Gallery, the BP Portrait Award is one of the most important platforms for international portrait painters. The competition is open to everyone aged 18 and over, in recognition of the outstanding and innovative work currently being produced by artists of all ages.

For the 2020 award there were 1,981 entries from 69 countries (917 UK entries, 1,064 international entries). Forty-eight portraits will be displayed at Aberdeen Art Gallery. The catalogue to accompany the exhibition features an essay written by Madeline Ward, Lead Curator at Aberdeen Art Gallery & Museums, which explores the art of self-portraiture.

The Award has a first prize of £35,000, making it one of the largest for any global arts competition. The winner also receives, at the Gallery’s discretion, a commission worth £7,000 (agreed between the National Portrait Gallery and the artist). The second prize winner receives £12,000 and a third prize of £10,000 is also awarded. The BP Young Artist Award, with a prize of £9,000 goes to one selected artist aged between 18 and 30.

This year’s winners were announced online on 5 May 2020. First Prize was awarded to a self-taught artist Jiab Prachakul, for her portrait entitled Night Talk, which depicts her close friends in a bar in Berlin. The judges thought the work was “an evocative portrait of a fleeting moment in time, giving us a glimpse into someone else’s life that is beautiful, mysterious and alive. It is loosely painted and the bold composition makes clever use of contrasting shapes.

Second prize went to Russian artist Sergey Svetlakov for Portrait of Denis: Actor, Juggler and Fashion Model. The judges said the work “was a timeless study showing devotion to detail and a connection between painter and subject. Tenderly observed, and unfussy, the thickly applied, re-worked paint skilfully describes the passage of time throughout the painting’s gestation.”Third prize was awarded to Michael Youds, a gallery attendant at the National Galleries of Scotland in Edinburgh, for his portrait Labour of Love depicting Tommy Robertson, the owner of an independent music store in the city. The judges thought that his portrait was “both poignant and funny. It definitely struck a chord as an allegory for a time and place that already feels nostalgic.”

Councillor Marie Boulton, Aberdeen City Council’s culture spokesperson, said: “Prior to Aberdeen Art Gallery’s closure for redevelopment in 2015, the BP Portrait Award was a popular feature of our exhibition calendar. We are grateful to BP for their generous support for the redevelopment project and we are thrilled to be presenting the exhibition in the beautiful new BP Galleries. We know that visitors will enjoy this fantastic celebration of the very best in contemporary portrait painting – and we look forward to seeing which work is chosen as Aberdeen’s Visitor Favourite.”

BP Senior Vice President, Emeka Emembolu, said: “We were pleased to be able to support the redevelopment of Aberdeen Art Gallery and are delighted that the prestigious BP Portrait Award is returning to Aberdeen and will be presented for the first time in the BP Galleries on the stunning new top floor of the building.”

The BP Young Artist Award of £9,000 for the work of a selected entrant aged between 18 and 30 was won by Dutch artist Egbert Modderman for Restless which depicts the Old Testament figure of Eli. The judges said the portrait was “highly accomplished. It combines the strong and striking composition with a surprising sense of immediacy. The thinly applied paint, with the interesting brushed effect, gives a sense of depth, while the use of a simple palette and monumental structure creates a compelling and mature work.”

The winner of the BP Travel Award 2019 was Manu Saluja for her proposal to create portraits of volunteers working in the vast communal kitchen at The Golden Temple in Amritsar, India. The resulting work is displayed for the first time in Aberdeen as part of the BP Portrait Award 2020 exhibition.