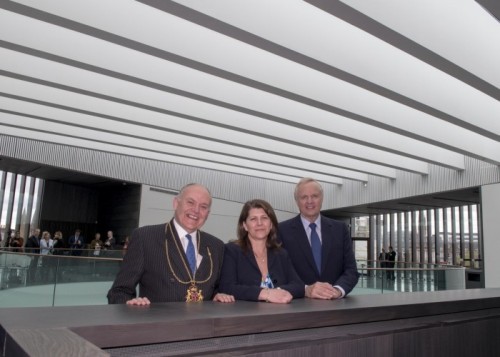 The BP Galleries are located on the Art Gallery’s striking new second floor. The copper-clad extension, designed by award-winning Hoskins Architects, complements the architecture and materials of the original Victorian building and encapsulates its transformation.

The BP Galleries will host three special exhibitions each year by national and international artists. As part of the funding agreement the popular BP Portrait Award will return to Aberdeen Art Gallery in 2020.

The announcement was made by BP Group Chief Executive Bob Dudley, who said: “We are proud that BP’s support for arts and culture in the UK stretches back more than five decades. Through our long-standing relationships with major centres like the National Portrait Gallery, the British Museum, the Royal Opera House and the Royal Shakespeare Company we enable access to excellence in the arts for millions of people. Today’s commitment adds the Aberdeen Art Gallery to the list of great institutions we support, in a city that is home for our people, our business and the community we are a part of.”

The Lord Provost of Aberdeen Barney Crockett said: “BP is following in the footsteps of the Aberdeen Art Gallery’s visionary 19th century founders. This civically minded group of businessmen and art collectors gave their money, time and works of art to establish both the building and the exceptional collection it houses, for the enjoyment of the people of Aberdeen and visitors to the city. Today’s investment by BP means that a new generation of visitors will experience and engage with exhibitions of the highest quality in contemporary surroundings which meet the needs of the 21st century visitor and complements the architecture of the original Victorian building.”

BP North Sea Regional President Ariel Flores said: “Aberdeen remains an important base for BP with the skills and talents of this city supporting our North Sea operations for more than 50 years. We have invested at record levels in our North Sea business, developing a portfolio fit for the future, however, our commitment to this region goes beyond our core business. Through our support of the Aberdeen Art Gallery we hope to make a material contribution to the fabric of the city. This is an exciting new chapter in the history of the art gallery, establishing it as a world-class arts and cultural destination.”

Councillor Marie Boulton, Aberdeen City Council’s culture spokesperson, said: “When it reopens in Autumn this year Aberdeen Art Gallery will be the city’s most inspiring, accessible and welcoming public building. We are thrilled that BP is supporting the revitalised Art Gallery and we look forward to working with them in the coming years to share inspiring art with our visitors, including the BP Portrait Award.”

The redevelopment of Aberdeen Art Gallery, which will reopen this autumn, is transforming the Art Gallery, Cowdray Hall and Remembrance Hall into a major cultural attraction in the city centre through significant investment in the fabric of the buildings, new exhibition and display galleries, improved visitor facilities and an enhanced activity programme.

The project has received £10m from the National Lottery Heritage Fund and £10million from Aberdeen City Council’s Non-Housing Capital Fund. The fundraising campaign to secure the remaining £10m has raised £4.8m to date.

BP is a long-term supporter of arts and culture in the UK, providing access to excellence in the arts for audiences and communities across the country. BP supports major events and institutions including the National Portrait Gallery, the British Museum, the Royal Shakespeare Company and the Royal Opera House. In Aberdeen, BP is a long-standing supporter of the annual Robert Gordon University Gray’s School of Art Degree Show and each year hosts the BP Big Screens, a live relay of opera performances from the Royal Opera House to Aberdeen’s Duthie Park.