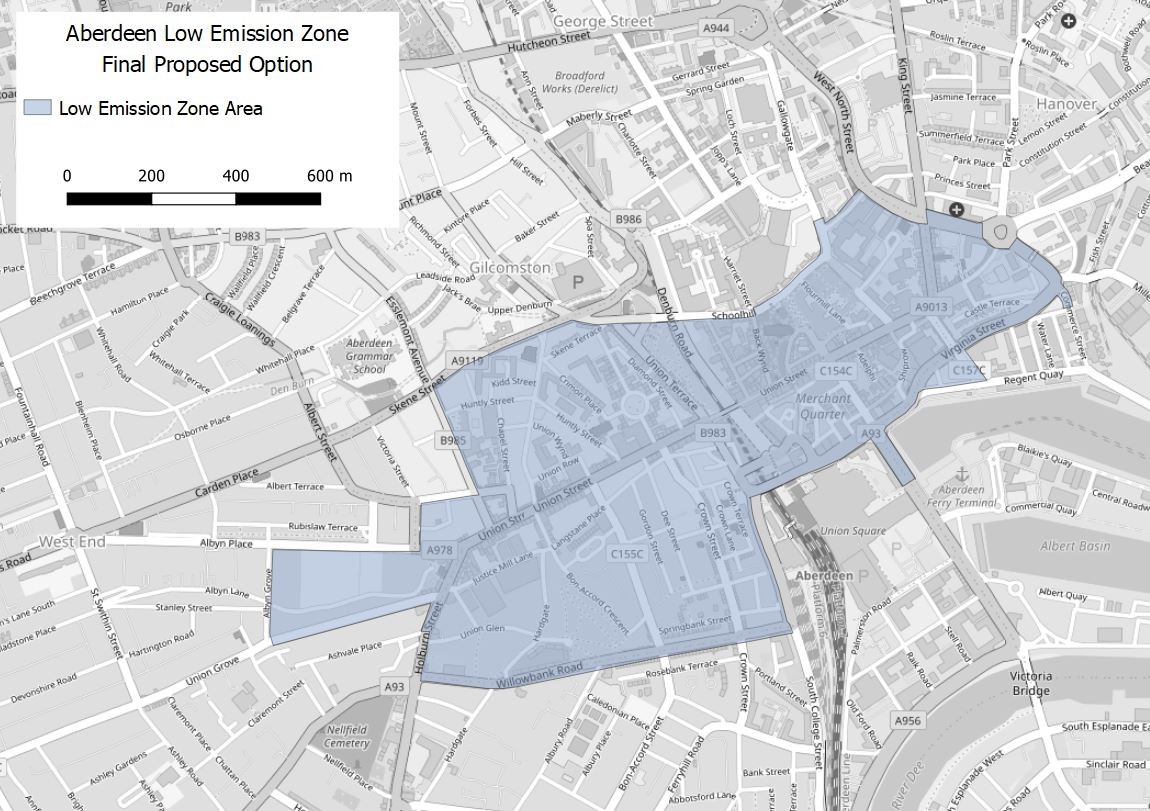 The boundary for the proposed low emission zone for the city centre was today agreed at Aberdeen City Council’s city growth and resources committee.

The boundary would mean an area of the city where the most polluting vehicles will be unable to enter however there would be a grace period of two years to enable residents, businesses and visitors time to comply with LEZ requirements.

Following unanimous approval at a meeting of the committee today, the City Council will conduct an eight-week consultation starting on Monday until 22 August 2021, formally publish the proposals and open a four-week objection period, and then formally submit the scheme to Scottish Government Ministers later in the year.

Eight options for a LEZ were put considered and based on the feedback received from consultation and traffic modelling results, some additional options were tested.

The preferred option, which was agreed by committee today and is to be consulted on, combines elements of Options 1A and 4A, and should maximise the air quality and public health benefits, while minimising negative impacts on local residents and businesses’.

The LEZ for Aberdeen would operate 24/7 and is one of four Scottish cities which is introducing LEZs by 2024 after legislation was introduced from the Scottish Government. Exceptions from the LEZ include emergency services, naval, military or air force vehicles, historic vehicles, vehicles for disabled persons including those being driven by a blue badge holder or with a blue badge holder as a passenger, showman vehicles, and motorbikes and mopeds.

It is estimated that by 2024, 86% of cars, 70% of light goods vehicles, 93% of heavy goods vehicles and all taxis in Aberdeen will be compliant with the LEZ.

Aberdeen City Council city growth and resources committee convener Councillor Ryan Houghton said: “This is a significant step forward for an LEZ in Aberdeen. The creation of an LEZ will help improve air quality for the city centre and I welcome the committee’s decision today.”

The report to committee said traffic modelling also indicated that non-compliant traffic displaced by the LEZ could migrate to streets around the periphery of the zone which may be inappropriate for accommodating this additional traffic, specifically Ferryhill Road and Fonthill Road to the south of the LEZ. The committee agreed a recommendation consideration of an access restriction to Millburn Street from South College Street and Palmerston Place should be made as part of Phase 2 of the South College Street Junction Improvement project.