A blogger who nominated one of Aberdeen's best-loved green spaces for a UK-wide Best Park competition has been given a 'thank you' for her efforts. 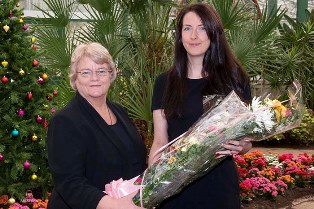 Pamela Miller, who writes Aberdeen-based family, home and lifestyle blog lifewithmunchers.com, had put forward Duthie Park for the award which is run by national charity Fields in Trust and was decided on by votes from members of the public.

The park, which is run by Aberdeen City Council, came joint runner-up in the competition and came top  in Scotland.

Aberdeen City Council Communities, Housing and Infrastructure vice-convener Jean Morrison said: "It was great that we went so far in the competition as we were the only park in Scotland to be shortlisted, and it was all down to Pamela nominating Duthie Park in the first place.

"This is a big 'thank you' from all the staff who work at the park and the volunteers who make such a difference helping to make the park such a fantastic place to visit at any time of the year.

"Duthie Park underwent a £5million refurbishment two years ago with funding from Aberdeen City Council and the Heritage Lottery Fund  it truly can claim to be the Best Park in Scotland as decided by the public and we hope taking part in the competition will lead to many more people discovering or re-discovering our beautiful Duthie Park."

Duthie Park was nominated by Pamela as: "Not only is it host to regular events for the city, but as the home of the Winter gardens, boating pond, vast green areas and the most outstanding kids' play areas, this park is a great all-rounder for a family day out".

Pamela, who received a bunch of flowers from Cllr Morrison, said: "We were asked to nominate our favourite park and in Aberdeen, there is one which stands out to me and that's Duthie.

"The facilities for children are excellent from the wooden playpark to the talking cactus in Duthie Park.

"It's fantastic that we came so far in the award as it shows that Aberdeen has a lot more going for it than just oil and gas."

The park comprises of 44 acres situated beside the River Dee within easy walking, cycling and bus journey of the city centre. It has the biggest range of facilities of all the city's parks including water features, playparks, Japanese Garden, and year-round facilities in the Winter Gardens and café.. It also has great walks around, and from the park, such as Old Deeside Railway Line and the River Dee.

A total of 122 UK parks were nominated for the competition held by Fields in Trust charity and more than 8,000 votes were cast  the contest was entirely decided by public votes.

Fields in Trust's search for the UK's Best Park started several weeks ago when communities from across the country were encouraged to nominate and vote for their favourite local park, sports field or playground they believed would be worthy of the title.