Bike Week pedals in to Aberdeen

Bike Week 2015 starts in Aberdeen on Saturday 13 June) with a host of events and activities. 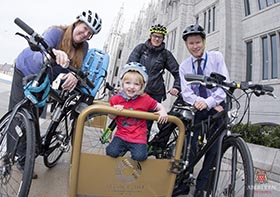 The national event comes as it was revealed that numbers of cyclists in Aberdeen have increased by 10% in the past year, according to figures in a yearly survey taken around the city.

Aberdeen City Council, cycling champion, Councillor Ross Grant said it was encouraging to see another rise in the number of people using bikes in the city.

He said: "It's easy to cycle around Aberdeen and everyone knows about the huge health benefits it brings.

"Aberdeen City Council is creating more cycle paths to help make cycling safer as we want to see more people get on their bike for everyday use for work and leisure, not just for sport.

"A lot of the parks and green areas in the city are a short bike ride for most people, and we also have about 40 cycle stands in the city centre alone for people to use when securing their bikes.

"It's great there has been an increase of people using bikes around the city and we would encourage more people to try cycling around  it's fun, environmentally-friendly, helps reduce the number of cars on our roads, and is an easy way of getting around."

Events taking place for Bike Week around Aberdeen include a Bike Roadshow at Duthie Park tomorrow (Saturday 13 June) from 10am to 3pm, and a Roadshow at Sunnybank Community Centre on Saturday 20th June from 12pm to 4pm. Both events are open to all and everyone is welcome. Several schools in the city are also holding their own events as part of Bike Week 2015.

Bike Week pedals in to Aberdeen