An environmental project which has transformed an area of Aberdeen from a neglected spot to a colourful wildflower meadow teaming with insects, birds and other wildlife has won a national award. 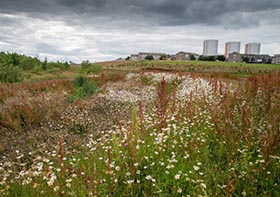 The East Tullos Burn Environment Improvements Project came top in the Herald Society Awards in the Environmental Initiative of the Year category.

Aberdeen City Council Communities, Housing and Environment vice-convener Councillor Jean Morrison said: "The award is a fantastic accolade for all the hard work from everyone involved in the project.

"It has totally transformed the area and this has only come about through working with partners and the local community.

"Well done to everyone involved in the project for this well-deserved award."

The project was launched in 2012 by Aberdeen City Council to look at ways to improve the East Tullos Burn in Torry as the area had been neglected in the past, suffering with poor water quality and litter problems.

The aim of the project was to look at ways to transform the burn into a more natural water feature that helps to improve the water quality, provide a haven for wildlife, and become attractive to local communities and visitors to the area.

With the help of the local community, a design was produced and work on the ground began in March 2014. The design included a new meandering course for the burn as well as the creation of wetland pond areas, with extensive planting of wetland plants and trees, plus improved access around the area including a new bridge.

Local school children from St. Fittick's Primary school helped put the finishing touches to the burn by helping to plant the remaining flowers on the site.

The site quickly became awash with colour during the summer of 2014, and plants included yellow iris, ragged robin, purple loosestrife, meadowsweet, poppies and cornflowers could be seen, with many lasting well into the late autumn and early winter. 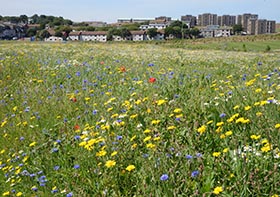 Insects including ladybirds, butterflies, damselflies and dragonflies have moved in along with many bird species, and the odd migrant and rare birds have also been spotted in the area.

Along with the City Council, the funders for the £300,000 project were SEPA's Water Environment Fund, Total E&P, Aberdeen Greenspace Trust Ltd, Aberdeen Forward and the North East Scotland Biodiversity Partnership.

The design and implementation companies which played a part in making the transformation happen were cbec eco-engineering UK Ltd, Walking-the-Talk and Salix.

A new group has been set up as a result of the project called the St. Fitticks Wildlife Group, and members record all the wildlife in the area involving the local community and schools.