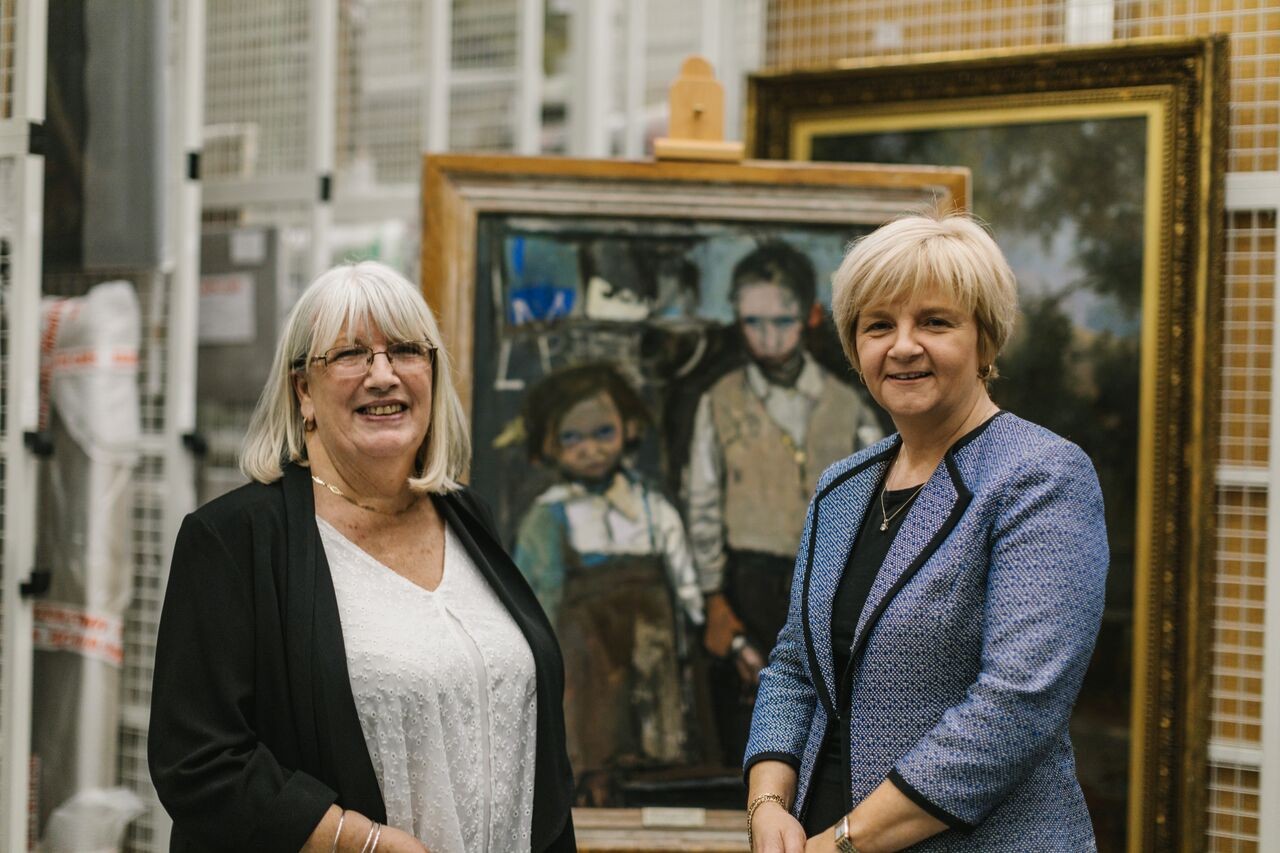 After 63 years, Margaret finally comes to face with her young self in famous painting

Aberdeen’s Treasure Hub was the scene of an emotional meeting yesterday (Tuesday 16 October) when, after 63 years, Margaret Livingstone came face to face for the first time…with herself.

Margaret, and older brother Alan, were the young subjects of Joan Eardley’s much-loved 1955 painting Brother and Sister which is currently housed at the Treasure Hub ahead of the redeveloped Aberdeen Art Gallery re-opening next year. But Margaret had never seen the painting for herself, until now.

The siblings were painted by celebrated artist Joan Eardley in the Townhead area of Glasgow in the 1950s.. In the painting, Alan places a protective hand on Margaret’s arm; the children were largely left to fend for themselves while their mother worked at the local ‘steamie’.

Poignantly, Margaret, who describes herself as a “wayward” child, was taken into care shortly after this painting was made, and sadly, she lost contact with her mother and brother for many years. She spent time in two children’s homes and at the age of 10 she was fostered by a family in Kilmarnock. From there she spent a year at the King Street Home for Girls in Aberdeen. She then became a live-in mother’s help for a family in Newton Mearns in Glasgow. Aged 15 she moved to London, where she lived and worked until her retirement in 2010. She now lives in Essex.

Margaret said, “I was incredibly moved when I saw the painting in the flesh for the first time today. I was so pleased that my daughter and grandson were here with me for this very special moment. I always felt that my family started with me, but seeing the painting today was a bridge to the family I lost. I’ve already decided that I need to come back to see it again next year when it’s hanging in Aberdeen Art Gallery.“

Aberdeen City Council Co Leader, Jenny Laing met Margaret at the Treasure Hub and was moved by the tale behind the painting: “It was such a pleasure to meet Margaret today and hear her touching story at first hand. It’s not often you have the honour of meeting the subject of a much-loved painting such as this one."

For Margaret, Brother and Sister is hugely important link to her lost past. She first heard about it when, with the help of the Salvation Army, she met her mother and brothers in Swindon in 1985. She had last seen them in Glasgow at the age of 13. All have now passed away. Some year’s later, Margaret’s eldest daughter Suzanne discovered that Brother and Sister had been exhibited at a gallery in London where it was on loan from Aberdeen Art Gallery & Museums.

Although born in Sussex,

Joan Eardley is one of Scotland’s most celebrated painters. She trained at Glasgow School of Art and spent her artistic career closely linked to Glasgow and the coastal village of Catterline, to the south of Aberdeen. A solo exhibition of her work was held early in her career at Aberdeen’s Gaumont Cinema.

The visionary founders of Aberdeen Art Gallery, including granite merchant, Alexander Macdonald, looked to their contemporaries when choosing work to collect. Brother and Sister was purchased in 1956 with income from the Macdonald Bequest. Macdonald’s monetary bequest has formed the basis for over 100 years of collecting contemporary art – as he had specified, painted within 25 years of purchase.

For Margaret seeing the painting for the first time with her eldest daughter and grandson is the realisation of a long-held dream.

After 63 years, Margaret finally comes to face with her young self in famous painting