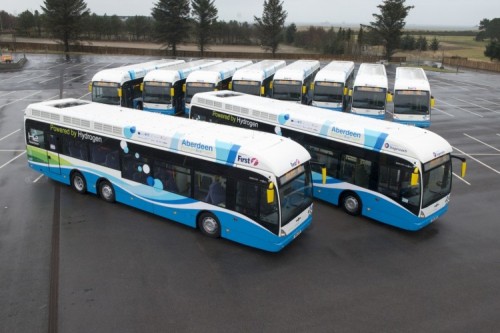 Aberdeen’s fleet of hydrogen buses has exceeded the million mile mark as the city’s reputation as a global energy innovator continues to build.

The Aberdeen Hydrogen Bus Project comprises two European funded initiatives and has grown to encompass a fleet of 10 vehicles operated by First Group and Stagecoach.

The public and private sector partnership has also created a network of infrastructure for the city, including Scotland’s first commercial scale production and refuelling stations at Kittybrewster and Cove as well as a dedicated maintenance facility.

The buses emit only water vapour, reducing carbon emissions and air pollution, as well as being quieter and smoother to run.

Councillor Philip Bell, Aberdeen City Council’s hydrogen spokesperson, said: “The million mile figure is one to celebrate and demonstrates the positive impact the hydrogen bus fleet has had in Aberdeen.

“Our city has a proud reputation as a global energy hub stretching back decades and this project shows Aberdeen is committed to continuing to push boundaries and developing technology that paves the way for a real shift in traditional thinking.

“The Council’s own teams have worked hand in hand with the private sector to roll out the fleet and create the supporting infrastructure and this fantastic milestone is a great credit to all involved.”