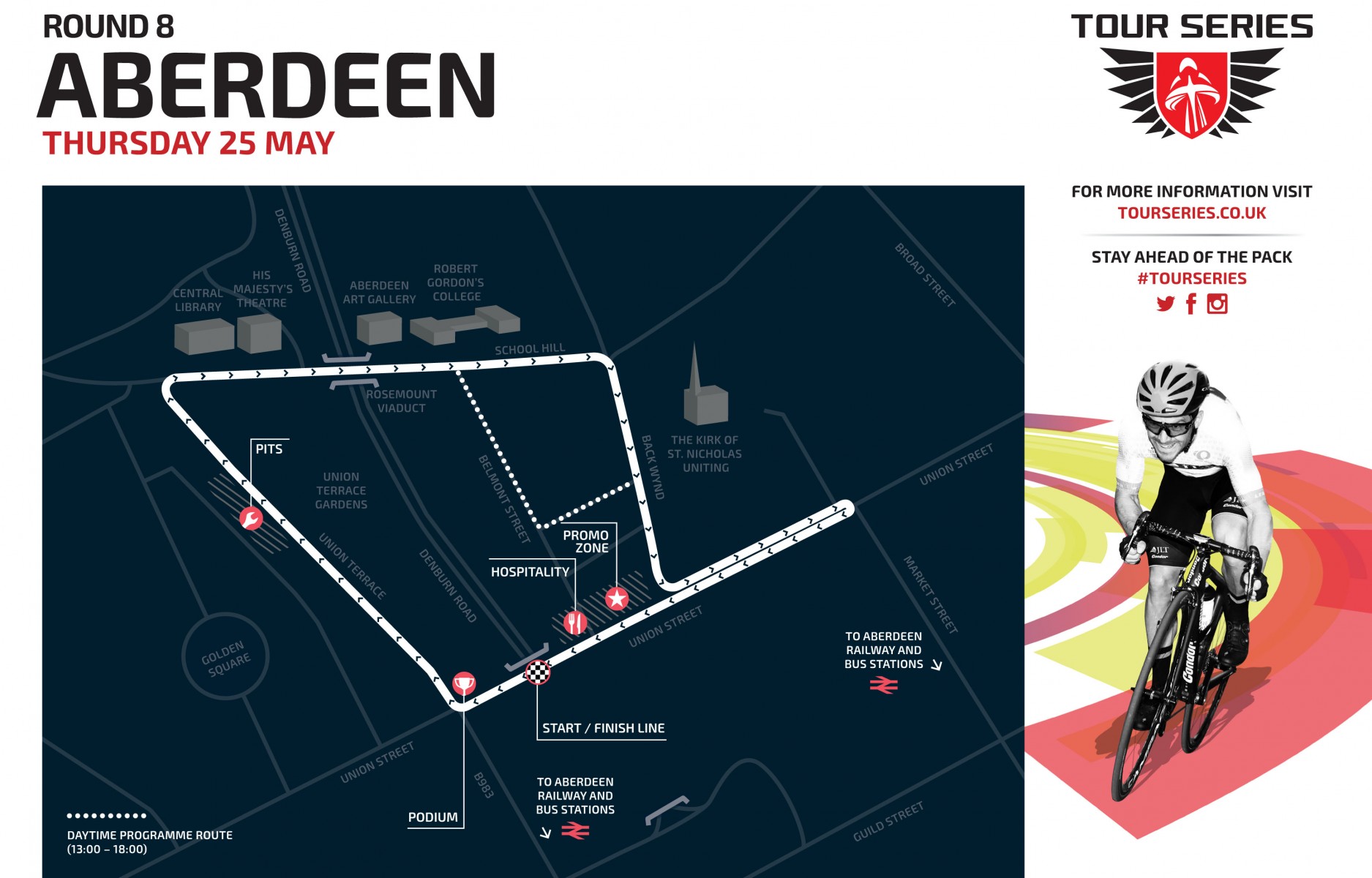 The challenging circuit for Britain’s fastest elite cycling race taking to the streets of Aberdeen has today [Friday 7 April] been revealed.

Thursday 25 May will see the centre of Aberdeen transformed to welcome The Tour Series for the first time, turning the city centre into a race circuit for the likes of defending champions JLT Condor, 2014 victors Madison Genesis and the returning ONE Pro Cycling.

The 1.2-kilometre circuit around the compact city centre will provide a stunning backdrop to a fast and furious night of criterium racing, with the beautiful architecture and vocal Scottish crowds setting the perfect scene as the race is broadcast around the world.

Aberdeen is hosting Round Eight of the nationwide Series.

The Lord Provost of Aberdeen George Adam said: “This event will ignite the city’s heart as the cyclists are put to the test racing past some of Aberdeen’s historic landmarks, such as Aberdeen Art Gallery, His Majesty’s Theatre with the start and finish on the city’s iconic Union Street.

“We are also encouraging the public to take part in a fun filled day of activities that will see the city centre brought to life by this unique cycling spectacle.

“Aberdeen’s position as a must-visit destination for high-profile cultural and sporting events is strengthened as the Tour Series kicks off our ambitious summer events programme. This leading cycling race is part of our wider Aberdeen 365 Events Strategy, a City Centre Masterplan initiative, which will see new events such as The Tour Series and Great Aberdeen Run brought to the city over the coming years.”

In total ten teams will take to the Aberdeen circuit, including a Scottish national team, and race it out in the hour long race starting at 19:30. Earlier in the day an exciting programme of races will take place on a revised version of the circuit, with events between 13:00 and 18:00 using a route, that takes in Belmont Street and Little Belmont Street that will provide a stunning backdrop to the competitive races across the day.

Paul Bush OBE, VisitScotland’s Director of Events, said: “It is great to be welcoming The Tour Series back to Scotland this year and to Aberdeen for the first time. EventScotland is delighted to be supporting the event that will showcase the area and all it has to offer to a TV audience of cycling enthusiasts.

“The decision by The Tour Series to once again bring two races to Scotland shows why we are the perfect stage for cycling events.”

Commenting on the circuit, Tour Series Race Director Mick Bennett said; “We are looking forward to bringing The Tour Series to Aberdeen this May. The circuit will showcase the heart of Aberdeen combining a very fast, flowing opening half of the lap with a more technical finale, including the slow last corner and a deceptive drag to the finish line on Union Street.”

Aberdeen is one of two Scottish venues hosting rounds of The Tour Series in 2017, with Motherwell hosting Round Seven on Tuesday 23 May. It will be the third time that the Series has visited the North Lanarkshire venue.

The Tour Series will get underway at Redditch in Worcestershire on Tuesday 9 May, finishing three weeks later in Stevenage on Bank Holiday Monday, 29 May.

Highlights of every round of The Tour Series will be shown on ITV4, with programmes also be available on demand via the ITV Hub. Action from the Aberdeen round will be on ITV4 at 22:00 on Friday 26 May with a repeat the following daytime.