Aberdeen surgeon to be commemorated

A pioneering Aberdeen medic is to be honoured with a commemorative plaque on Union Street.

In 1881, working in his home laboratory, he discovered the Staphylococcus organism and showed it to be the main cause of post-operative wound infection.

Sir Alexander was an advocate for antiseptic surgery and while serving in the military he championed the creation of the Royal Army Medical Corp as well as introducing new procedures at Aberdeen Royal Infirmary.

A request from the Aberdeen Medico-Chirurgical Society to mark Sir Alexander’s contribution to medicine was approved by Aberdeen City Council’s City Growth and Resources Committee.

Sir Alexander will also be celebrated at a new visitor attraction at Provost Skene’s House, which is being redeveloped by the Council to showcase local people who transformed the world. 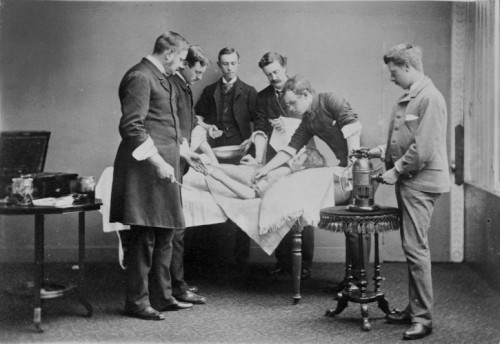 * Photograph shows: Surgical Procedure at Aberdeen Royal Infirmary, 1870s. Sir Alexander Ogston is fourth from left with the large moustache. The scene was created to demonstrate the introduction of Joseph Lister's carbolic spray (on the table), a new antiseptic procedure Ogston promoted.

Aberdeen surgeon to be commemorated