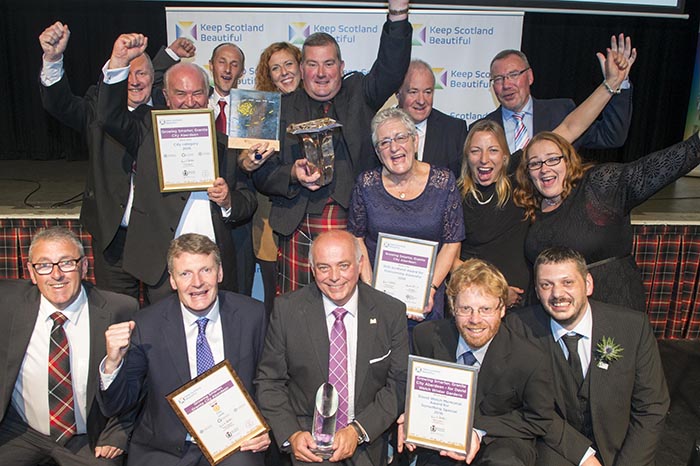 Aberdeen City Council and six groups from across the city were awarded the accolades which recognise the hard work carried out to clean up, green up and beautify the local area.

The awards, which were hosted by the City Council and held at the city’s Beach Ballroom, are organised by environmental charity Keep Scotland Beautiful.

Aberdeen received a Gold Award and was named as the City Category overall winner, and it was also presented with the David Welch Memorial Award for Something Special for the exceptional David Welch Winter Gardens in Duthie Park.

It also received the Discretionary Royal Horticultural Society Scotland Award for Overcoming Adversity in recognition of the rejuvenation undertaken at Seaton Park following storms and flooding in late 2015 and early 2016.

Powis Residents Group also received a Silver Gilt Award and was named as the Flatted Community Category overall winner. The group were also presented with the Discretionary Jim Murdie Trophy for Sustainability recognising its innovative approach to community gardening, including reusing and recycling materials to create features enhancing their green space.

The other Aberdeen award winners were:

Aberdeen City Council Leader Councillor Jenny Laing said “Aberdeen can rightly be proud that once again we have received a Gold Award at the annual Beautiful Scotland awards.

“Our city has amazingly beautiful parks and green spaces and it’s wonderful that the hard work, effort and enthusiasm put in by our staff, partners and volunteers has received the recognition it deserves.

“I would like to extend congratulations to all our winners and express my thanks for all their endeavours over the last year.”

Twelve category winners, with additional Discretionary Awards and the overall Rosebowl, were presented at the ceremony. All entries were assessed against the three core pillars of the Beautiful Scotland campaign - Horticultural Achievement; Environmental Responsibility and Community Participation.

The event, which brought almost 300 delegates from across Scotland together in the city to receive their awards, saw George Anderson of the BBC’s Beechgrove Garden present almost 50 accolades - recognising the significant number of entrants into the gold anniversary competition.

Derek Robertson, Chief Executive of Keep Scotland Beautiful, said: “I would like to congratulate all of the Beautiful Scotland 2016 award winners. Quality local environments are vital to vibrant communities and good for business - helping to nurture respect for local places and improve wellbeing.

“All our Beautiful Scotland entrants have committed a lot of their own time and energy to make sure that Scotland’s outdoor spaces are kept clean, green and beautiful. The Beautiful Scotland awards ceremony provides the opportunity to showcase the role that they have played in making a difference. It is vital that we reward their efforts and celebrate their achievements.”

Liz Stewart Development Manager for RHS Scotland said: “We are delighted that the RHS Scotland Award for Overcoming Adversity is awarded to Seaton Park, in recognition of the incredible hard work and sheer determination shown by council staff, the Friends group and local volunteers, who worked together to bring the Park back to its former glory.”

Beautiful Scotland is managed by Keep Scotland Beautiful, a member of the RHS Bloom Federation. Entrants are judged by a team of expert volunteer judges on their year-round achievements. Awards are presented to a range of local authorities and communities who have achieved the highest scores in their categories, with Discretionary Awards given to those who demonstrate excellence in their commitment to the campaign. Some of the winners will go on to represent Scotland in UK RHS Britain in Bloom in 2016.

The Aberdeen awards ceremony was supported by Aberdeen Inspired and sponsored by Balmoral Group Holdings Ltd and Amberol Ltd. Further information can be found at: www.keepscotlandbeautiful.org/beautifulscotland

Keep Scotland Beautiful is the charity that campaigns, acts and educates on a range of local, national and global environmental issues to change behaviour and improve the quality of people’s lives and the places they care for. We are committed to making Scotland clean, green and more sustainable.