A team of students have been enjoying the spotlight with an idea to help illuminate Aberdeen city centre.

The group of six from the pioneering CityLab! programme presented their proposal to Steensen Varming, the design consultancy commissioned to draft a creative lighting strategy for the “Aberdeen in Colour” City Centre Masterplan project.

“People Powered” received feedback from project leader Mijram Roos on their concept of a “fun interactive device” that would draw its energy from footsteps.

Steensen Varming has already included renewable energy and interactive systems as part of its emerging creative lighting strategy and implementation plan, which will go to Aberdeen City Councillors for consideration early next year.

Councillor Marie Boulton, who attended the presentation, said: “The City Centre Masterplan talks about the need to develop a range of distinctive experiences in Aberdeen and the students have responded to that with their own vision.

“When developing and delivering Masterplan projects we must be receptive to the community’s feedback and input, and this is a great example of how we can tap the city’s talent and give it a platform to shine.” 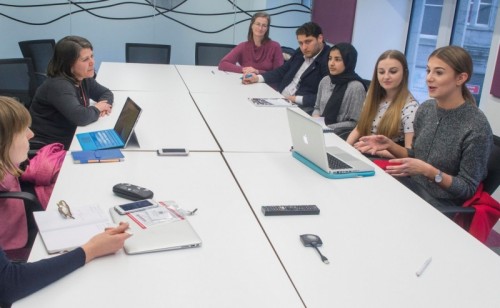 Mijram Roos said: “CityLab! is an exciting initiative and it was great to see the enthusiasm and creativity of the students.”

Aberdeen in Colour is being taken forward by Aberdeen City Council and Aberdeen Inspired, the banner under which the Business Improvement District operates.

Aberdeen Inspired chief executive Adrian Watson said: “Aberdeen Inspired itself has been nationally and internationally recognised in the field of innovation and very much welcomes any cutting-edge thinking that will help add value to our city centre space.

“That is why we warmly welcome the efforts of the students involved in the CityLab! project work and encourage others to share their ideas in pushing our great city centre forward.”

CityLab! was launched two years ago and is run by Aberdeen City Council, the University of Aberdeen, and Robert Gordon University. Students from different disciplines come together to design, develop and deploy an “innovative sustainable project” that could improve the city.

Caitlin said: “We feel our idea fits with the City Centre Masterplan and the Light of the North concept. It could light up like a totem at night and the colours could change with the season – for example, blue for winter.”

The team added that as well as enhancing the “visual environment” the device could offer a new way to engage with the public by posing questions answered by standing on tiles.

Redwan said: “The device could inform the public about the Masterplan and what’s happening in the city or it could be used for market research.”

Should the “Aberdeen in Colour” project progress, further engagement between “People Powered” and Steensen Varming could take place.

Last year another CityLab! group, "Next Step Energy", also explored capturing energy from footsteps with a view to re-using it.