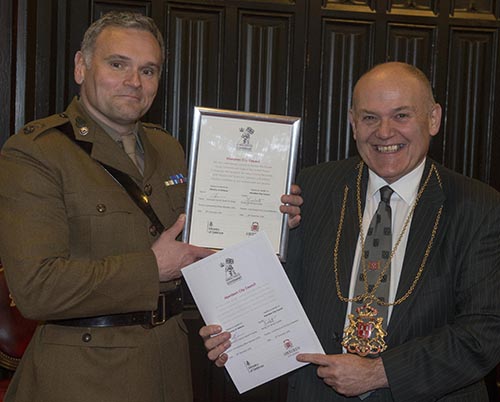 Aberdeen’s commitment to the Armed Forces has been renewed with the formal signing of a new Covenant between the City Council and the Armed Forces in the Town House today (Tuesday 20 November).

The Armed Forces Covenant is based on the premise that those who serve or have served – and their families deserve respect, support and fair treatment.

The Lord Provost of Aberdeen Barney Crockett, who is Aberdeen’s Armed Forces Champion said: “I am very pleased to sign the Covenant on behalf of Aberdeen City Council as we have a deep appreciation of the Armed Forces community and that is clear from the additional commitments of the refreshed Covenant.

“This Covenant sets the standard and I hope it might form the basis for other local authorities to follow suit.”

The Council’s key commitments to the Armed Forces are detailed in the Covenant. These are to:

The Council is in the process of setting up a working group to ensure it meets these commitments.

As part of its commitment the Council donated £10,000 to the PoppyScotland appeal in the run up to Armistice Day 2018.

Following the signing, the Lord Provost in his role as Lord-Lieutenant, took the opportunity to present a special award to Aberdeen Lord-Lieutenant cadet Flight Sergeant Jamal Ronald, who has achieved the highest rank that a cadet can achieve in the UK.

FS Ronald, from the Bridge of Don area of Aberdeen, is based with 2288 Montrose Squadron Air Training Corps.