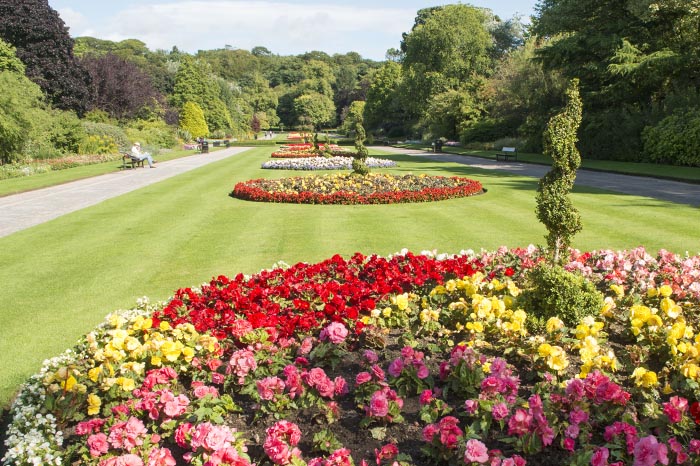 The city was also honored by RHS judges who awarded it the ‘RHS Britain in Bloom Award for Overcoming Adversity’, in recognition of the way Aberdeen pulled together to bounce back after the devastation wrought by Storm Frank.

Aberdeen, which represented Scotland, was one of only four areas from across the UK chosen to compete in the City category of the awards. Aberdeen’s medal, the highest available, confirms its position as one of the greenest and most beautiful cities in Britain.

Aberdeen City Council Communities, Housing and Infrastructure vice convener Councillor Jean Morrison said: “I am absolutely delighted that Aberdeen has been recognised in this manner.

"Securing a gold medal and being named category winner in the prestigious RHS Britain in Bloom competition is due recognition for hard work of the many Community volunteers, schools and staff of our Environmental Services Team, who all contribute greatly, throughout the year.

“Being a finalist in this years Britain in Bloom competition has allowed Aberdeen to showcase the horticultural excellence and community participation which makes Aberdeen a wonderful place to live, work or visit.

"Our volunteers and staff will continue to strive for improvement in these areas and these awards give us encouragement to continue to make our parks and greenspaces places that people want to visit and admire.”

The RHS Britain in Bloom Awards ceremony celebrates the huge contribution made by the 300,000 Bloom volunteers whose hard work and dedication help transform what are often grey and unloved areas into greener, cleaner and more beautiful spaces for everyone to enjoy.

Carole Noble, Operations Director at Keep Scotland Beautiful, said: “We are delighted that five winners from our national Beautiful Scotland competition last year are representing Scotland in the RHS Britain in Bloom finals in 2016.

"We know that the work of these groups to raise horticultural standards, improve environmental quality and to reach out to members of the community, directly impacts almost a million people who live in the cities, towns and villages across Scotland. The five Scottish finalists deserve a huge thank you from all of those in Scotland who reap the benefits, and we’d would like to say a massive thank you to them and all those members of the ‘bloom’ family across the UK.”

Over the summer, teams of RHS judges travelled the length and breadth of the country to see the 72 finalists’ Bloom campaigns to determine who would lift the top prizes. Each finalist was assessed against three key criteria: community participation, environmental responsibility and of course, horticultural achievement.

Chairman of the UK Judging Panel Roger Burnett said: “This has been a truly outstanding year for Britain in Bloom with local communities devoting tremendous amounts of time and effort into greening grey areas and sharing the many health and social benefits of horticulture.

“The judges were very impressed by the way communities refused to let the many challenges they faced hold them back. The finalists’ desire and determination to make their environment as green and pleasant as possible was truly humbling.

"We as judges are privileged to have a front row seat to see Britain in Bloom volunteers change the lives of thousands through their work. And it’s fitting that their efforts are recognised and celebrated.”

For the first time the RHS introduced a special award to recognise areas that have overcome adversity, such as flooding or vandalism.

The ceremony, which was held in Birmingham, was hosted by TV Gardening Expert Chris Beardshaw.