The countdown has begun to the Simplyhealth Great Aberdeen Run – with more than 50 staff from Aberdeen City Council amongst those gearing up for the event.

They will be lacing up their trainers and are joining in the 10k and half marathon on Sunday 26 August.

Employees with varying degrees of running experience have signed up and are training hard.

“It’s fantastic that Council staff are getting on board to be a part of the event and also embracing the charity opportunities the day provides. We are immensely grateful to every one of our fundraisers for all their efforts.

“The run has already demonstrated the way it brings individuals and communities together and it is making a tremendous impact in many ways.

“Aberdeen City Council is making a concerted effort to raise the city’s profile through our ambitious events programme and this event is an integral part of strengthening our position as a must-visit destination with a busy programme of high-profile attractions.

“Through our City Centre Masterplan and Aberdeen 365 programme, the Council is investing in events that drive a positive economic impact for the city whilst showcasing Aberdeen and its people.”

Among those running for charity are Sean Cremer and Robin Dillaway. Sean and Robin, from the finance team at the Council, are running to raise funds for the high dependency ward at Royal Aberdeen Children’s Hospital.

Both Sean and Robin are active runners. Sean ran the inaugural Simplyhealth Great Aberdeen Run and is looking to beat his time from last year.

Sean said: “Training has been tougher this year due to the warm summer we’ve been having, but it’s been good conditions to train in if race day is to be as warm this year as it was last year!”

Robin, running his fourth half marathon, said: “It’s a great opportunity to run for a charity and a chance to get involved from a work point of view and form a team with colleagues.

“With many of us taking part from Aberdeen City Council there will be no shortage of friendly colleagues around for moral support at the start line.”

Races start and finish on Union Street and the routes take in many more of Aberdeen’s cultural landmarks and iconic buildings such as the Castlegate, Beach Ballroom, Brig O’Balgownie, King’s College, Marischal College, Art Gallery, His Majesty’s Theatre and the Music Hall.

The route also takes in a new section through Seaton Park this year and continues through the historic surroundings of Old Aberdeen and another new section around the University of Aberdeen.

Alongside the two main races there will also be a family run so the younger runners in the city can take part in the day.

The event is being delivered in partnership with Aberdeen City Council, Aberdeen and Grampian Chamber of Commerce, VisitAberdeenshire, and Aberdeen Inspired. It is being supported by the Aberdeen City Centre Masterplan.

To sign up for the Simplyhealth Great Aberdeen Run visit www.greatrun.org/Aberdeen . 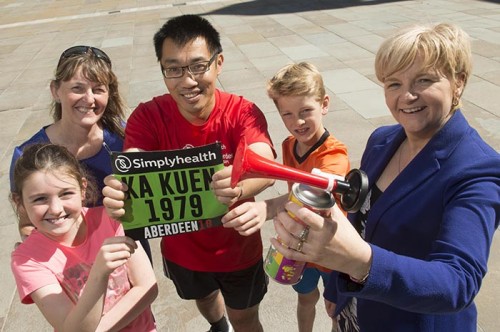