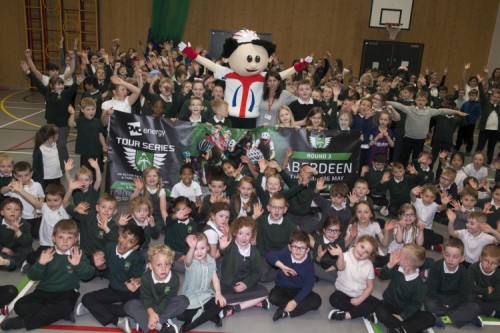 Aberdeen primary school pupils have joined the big race build-up as the city prepares to host another action-packed leg of the OVO Energy Tour Series.

The cycling showpiece on 16 May will bring professional riders to the city to test themselves on circuits of a 1.3km course and also offers amateur competitors, including in corporate and youth categories, to sample the unique atmosphere created by the Aberdeen crowds.

As the countdown continues, event mascot ToBi has been on a whistle-stop tour taking in six schools.

ToBi and the team from Aberdeen City Council, which has attracted the OVO Energy Tour Series to the north-east as part of the ambitious Aberdeen 365 events strategy, gave pupils an insight into the popular road race competition.

They also picked 20 junior mascots to represent the elite teams on the day, with pupils from Stoneywood, Hazlehead, Bramble Brae, Mile End, Gilcomstoun and Skene Square selected to take part this year.

Aberdeen has hosted a leg of the series for the past two years and for 2019 there’s a new route for riders and spectators to enjoy - starting and finishing on Broad Street and following a loop which takes in Union Street, Back Wynd, Belmont Street, Schoolhill and Upperkirkgate.

Councillor Marie Boulton, Aberdeen City Council’s culture spokesperson, joined ToBi on his visit to Stoneywood School and said: “Bringing elite cycling to the city centre has been a huge success, attracting thousands of spectators in 2017 and 2018 as well as showcasing Aberdeen to a global television audience.

“We’re looking forward to another fantastic day of competiton and it’s wonderful to have local pupils getting involved as mascots – with many more in the crowd to cheer on the riders in the elite and amateur categories and talented young competitors in the youth races.”

Taking place in seven town and city centre locations, the OVO Energy Tour Series has become an annual highlight of the domestic racing scene since its inaugural campaign in 2009.

The 2019 event is part of a packed 12-month programme led by Aberdeen City Council, which began with Nuart Aberdeen last month and will also include the opening of Aberdeen Art Gallery following its major redevelopment and the opening of The Event Complex Aberdeen.