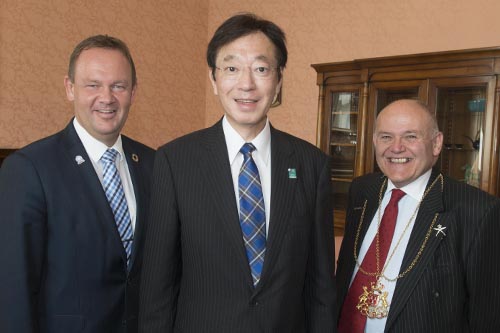 The Lord Provost of Aberdeen Barney Crockett became the President of the World Energy Cities Partnership at the partnership’s AGM today (Saturday 07 September).

Mayors and senior officials from 13 of the world’s leading energy cities have been in Aberdeen for the four-day World Energy Cities Partnership (WECP) conference and Annual General Meeting (AGM), which got underway on Wednesday 04 September.

The Lord Provost had been the Vice President and sought the Presidency when the now former President Mayor Mike Savage of Halifax Regional Municipality (Canada) stepped down at today’s AGM.

Mayor Jesper Frost Rasmussen of Esbjerg, Denmark, was appointed Vice President of the World Energy Cities Partnership at the AGM.

Established in 1995, the WECP now connects 20 of the world’s leading energy capitals – the City of Kobe (Japan) was accepted as a member of the WECP at today’s AGM.

The WECP aims to strengthen social and economic development by promoting collaboration and partnerships in energy-related activities, with a particular focus on sustainability, education and innovation. The member cities are uniquely positioned to address the issue of a sustainable, long-term energy future for all.

Conference sessions, seminars, and panel events give participants access to industry experts and innovators, the opportunity to benefit from their expertise and to share knowledge on current and future developments while also facilitating business-to-business interaction, industry visits and networking opportunities.

The Lord Provost of Aberdeen Barney Crockett said: “It is a great honour for me personally to become the President of the World Energy Cities Partnership, in what is a very exciting time in the life of Aberdeen.

“Renewable energy is no longer seen as an alternative or future energy; it has become a mainstream energy source and this topic was a focal point throughout the AGM and conference.

“The WECP conference showcased local companies and international companies based here in the Granite City and highlighted how Aberdeen City Region is a pioneering region. Examples of this are the £180million Oil and Gas Technology Centre and the world’s first floating wind farm – Equinor’s Hywind Pilot Park. Aberdeen is also a centre of excellence for hydrogen and fuel cell technologies, with the largest fleet of hydrogen buses in Europe.

“The world is changing, Aberdeen is transforming, and the Presidency of the WECP gives us the opportunity to further enhance the city’s reputation as a global energy hub and world class business location while attracting further investment.

“It will lead to further collaboration between Aberdeen and other member cities and I would encourage industry, the academic sector, civic and third sector leaders to get involved to maximise the long-term benefits of being part of WECP has to offer.”

Jesper Frost Rasmussen, Mayor of Esbjerg, Denmark said: “I am very proud and honoured that I have been elected new Vice President for the World Energy Cities Partnership today.

“Together with the new president, Barney Crockett, and the other 18 mayors in the energy cities of the WECP, we will drive the energy transition agenda. Aberdeen is well known for its innovative hydrogen transport programme, and Esbjerg has a leading role regarding offshore wind.

“It is easy to see, that there is a lot of knowledge and knowhow within the 20 energy cities and it will be our task to share that knowledge across the world and inspire new cities to join our agenda. Together we are strong and together we can make an impact on developing green energy and reducing carbon emissions.”

Kizo Hisamoto, Mayor of Kobe, Japan said: “In his opening video message at the WECP AGM, His Royal Highness Prince Charles mentioned the need to transition away from fossil fuels and touched on the significance of Kobe joining the WECP. We are all greatly honoured by his mention.

“It is a great honour for our city to join the WECP and I would like to use this opportunity to express my sincere gratitude to everyone who made this possible.

“Striving to become a front runner in the energy field, the city of Kobe is undertaking various projects related to hydrogen energy, centred in our Hydrogen Smart City Kobe Initiative. With the help of the WECP network we are looking forward to developing our hydrogen projects even further.”

The posts of President and Vice President are held for a period of two years.

Images from left to right: